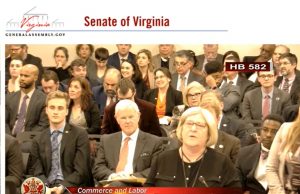 lowkell - February 24, 2020 1
See below for video from a little while ago, as a watered-down version of Del. Elizabeth Guzman (D)'s HB582 - "repeal the existing prohibition...

The Wrong Fight over the Government Workforce

You've got to hand it to the Repubs - they never miss an opportunity to push their agenda as far as (in)humanly possible.  So, no surprise that they are using the current obsession with the deficit to simultaneously turn government workers into scapegoats and crush unions through a divide-and-conquer strategy aimed at creating tensions between public and private sector employees.  Strategically brilliant - and utterly callous and cynical - as usual.

One of the many disturbing things about this fight is the fact that neither Repubs or Dems - nor anyone else - is talking about what really needs to be done to make our government work more cost-effectively and efficiently.  Based on my own experiences working in government, there are two fundamental, but fixable, problems that cause the most waste in the public sector:

* Spectacularly lousy management, and
* The failure to reward the best performers and get rid of the worst.

So, while the Republican effort to demonize public employees, and take away their rights to defend themselves through collective bargaining, is wrong-headed, verging on evil, the appropriate Democrat response would not be to say that government and such unions, are right on all particulars, and have nothing that needs to be fixed.  In my experience, the problem with such unions is that they tend to treat all employees equally and therefore treat proposals for merit pay and attempts to make it easier to get rid of dead wood with undue suspicion.