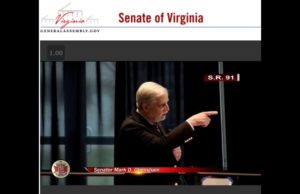 I May Be Gerrymandered But I’m Voting

As I prepare to vote Tuesday, I find the prospect less that thrilling. I do have a choice in my delegate and senate races, unlike the majority of Virginians. However, the chance the people I'm voting will win is about the same odds as my winning the lottery.

Before my senate district was gerrymandered, I would have had the great satisfaction of voting for Brandon Bell over Ralph "Mr. Carpetbag" Smith. Now, I will be voting for Robert Short, a 24-year-old Iraq veteran Democrat with no money, against Steve Newman, the Falwellian Senate Republican Caucus leader. The thought that Newman would "represent" me in Richmond is disgusting, but as a friend of mine from Lynchburg joked, "The only good thing about Newman is that you won't have to see or listen to him again until the next election."

Even though I was gerrymandered out of my old house district, I have a fine Democrat to vote for. Lewis Medlin is a small businessman from Bedford County who would be a great representative. While this time Medlin has the best shot he has had in his three runs for the House of Delegates, he's still faces long odds. He's running against that old fossil Lacey Putney, the Byrd-Democrat-turned-Independent who caucuses with Republicans. Putney has a Republican opponent, Jerry Johnson, a Tea Partier who won't get many Republican votes. Bearing Drift said of Putney, "Del. Putney is not only an unofficial face of the GOP in Richmond, but he is also a recognized face among the party faithful in central and western Virginia." So, I'm sure the majority of GOP voters will break their party pledge and go for Putney.

I may not be happy with the way gerrymandering has changed my districts, but I will vote. It is imperative that all Democrats go to the polls and vote. I won't be voting for people likely to win, but Democratic turnout is the key to keeping the State Senate in Democratic hands. Everyone should also remember that local offices are on the ballot.

No Free Ride This Time for Newman

If Sen. Steve Newman (R-Lynchburg) thought that he was going to get another free ride this November, he's in for a surprise. Robert Short, Sr., is seeking the Democratic nomination against Newman, the Senate Republican caucus chair, in the re-drawn 23rd District. The 23rd now includes part of Lynchburg, all of Botetourt County, most of Bedford County, and parts of Roanoke and Campbell counties, so Short has his work cut out for him.

A native of central Virginia, Robert Short is a veteran of two tours in Iraq as a member of the National Guard. He currently lives and works in Bedford. He is married and the father of three.

As Short recently told the Botetourt County Democratic Committee, "For years we have been sending career politicians to Richmond. Isn't it time we sent someone who actually earns a pay check?" Short stated that he stands for a world class education for our children and responsive government.

"This is not what we have gotten from our current representative[in the 23rd]," Short noted. That observation matches what people Newman currently represents have told me. No one sees or hears from him unless they happen to attend a Republican event.

This candidacy is a real long shot, but perhaps it takes a person who's faced enemy fire in defense of the nation to take on a GOP powerhouse like Steve Newman, whose most noted legislative "achievement" was passage of an amendment to the Virginia Constitution that for the first time took rights away from the state's citizens, the so-called "Defense of Marriage" amendment.

In his platform Short states unequivocally, "No one should be discriminated against based on his or her race, color, religion, creed, sex, veteran status, sexual orientation, national origin, age, or disability, but each individual should be judged solely on the basis of their character and merit."

I, for one, will be very thankful that there will be a choice on the ballot, instead of what is supposed to be a contested election being simply a foregone conclusion. Maybe the DPVA needs to make candidate recruitment the number one discussion item at the upcoming Grassroots Summit.

In my part of the Commonwealth, the musical chairs following redistricting are creating quite a bit of business for moving vans. My right-wing Republican senator, Ralph Smith, is packing his bags and moving to the district now represented by fellow right-wing Republican Bill Stanley, the 19th. Stanley, meanwhile, has reportedly decided to move his residence to the 20th senatorial district, where Democrat Roscoe Reynolds is the incumbent. Sadly for me, redistricting put both Smith and Jerry Falwell acolyte Steve Newman into my redrawn district, one that has become even more Republican. So, I get rid of one right-winger only to likely get another right-winger, one who believes he is doing "God's work."

Both Stanley and Smith may have some difficulty in winning election from the districts they have chosen for their new abodes. The new 20th district, which resembles some sort of "sleeping dragon" stretching from Galax in the west to South Boston and also taking in Martinsville and Danville, has become 7.1% more Democratic, according to VPAP. While that district does include more than 30% of Stanley's old district, he will be hard-pressed to overcome the incumbent protection engineered into the new district lines.

Smith might have an easier time in Stanley's old district, which VPAP calculates will be 2% more Republican than it already is. However, he is not well-known at all in that area, since his only other political forays have been one term as mayor of Roanoke City and his term in the state senate from an area north of Roanoke. The new 19th meanders from southwest of Lynchburg all the way to Wythville. The Republican gains comes from precincts in Salem, home to that champion of dirty coal and mountaintop removal, Rep. Morgan Griffith.

Another interesting political story playing out in my area involves that old House of Delegates fossil from Bedford, Lacey Putney, bless his heart. He may have been cozy with the Republicans for years, but they did him no favors in their redistricting plan. His new district, which lost reliably Republican parts of Bedford County, now includes Clifton Forge and Covington and stretches to the West Virginia border. According to VPAP, the district may still lean slightly Republican, but it gained 11.7% in Democratic strength.

So, population gains in northern Virginia are making strange new neighbors and odd political bedfellows out here in the hinterland.