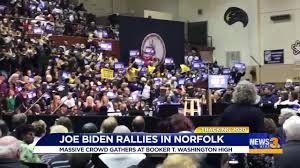 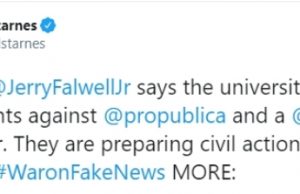 lowkell - April 8, 2020 11
Over the past couple weeks, Liberty University President Jerry Falwell, Jr. has really gotten himself in the news regarding the COVID-19 crisis. For instance,... 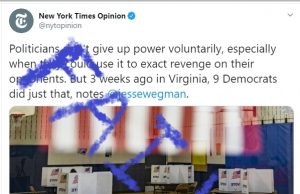 lowkell - March 29, 2020 7
As a kid, I grew up idolozing the NY Times as the greatest newspaper in the world, the source of truth and enlightment -...

Andy Schmookler - September 7, 2018 3
An Unfit President As everyone presumably now knows, the New York Times published on Wednesday an op/ed by an anonymous "senior official" in the Trump...

NY Times Asks: Should They Tell Readers When Politicians are Blatantly...

Was that a clear enough answer? No? OK, then, here are a few examples to illustrate.

Then, the media might actually start to regain a bit of the credibility it's utterly lost in recent years, by its constant perpetuation of an absurd and false "balance" between "both sides" of any "argument" (e.g., one side says the earth is flat, the other says it's round). But will they do that?  I mean, reporting the facts and letting readers know when someone's telling a lie is just so hard, it would require reporters and editors to get off their fat behinds and actually do what they are getting paid good money to do. What a concept, huh?

The US Goverment killing in our name – SECRETLY

By now most people who pay attention to the news of such things know that an American citizen,  Anwar al-Awlaki, was targeted for death and killed by a CIA drone on in Yemen on September 30.   Among the other three killed in the attack - not targeted and thus "collateral damage" - was another American citizen, Samir Khan.   Today's New York Times has two pieces I consider a must-read for all of us that address this topic.

Charlie Savage, who when he worked for the Boston Globe did magnificent journalism in exposing the extensive use of signing statements by the Bush administration, has a piece on the front page titled Secret U.S. Memo Made Legal Case to Kill a Citizen.  The public editor, Arthur Brisbane, devotes his Sunday column to the topic as well, under the title The Secrets of Government Killing.

There are several issues of importance in this matter.   The first is that the administration has authorized the killing of American citizens not in ordinary acts of war and not even in a true combat zone, but in what can only be called a targeted assassination.   The second, perhaps of even more significance, is that the authorization was granted by a memorandum that has even now not been disclosed to the American people, you know, the "We, the people of the United States" who are the legitimate sovereigns of this nation on whose behalf the government is supposed to be acting.

I do not propose to fully go through either piece - that is why I have provided the links.  I do wish to explore a few aspects of the issue and fully intend to offer my own thoughts, which will be neither complimentary towards or supportive of this administration.