The enormity of the problem surrounding world hunger and starvation has often been an argument used by my circle of friends and acquaintances to turn our collective attention away from the issue. The issue of global hunger and starvation is unequivocally a daunting problem for any country, let alone a group of individuals. Nonetheless, it is an issue that jars one's complacency once a few straightforward facts are known.

First, there are nearly one billion individuals in the world today who are "malnourished." A significant part of the problem has been the inability of the world to increase its production of food. That is, the world food production may have reached a plateau.

Here is a staggering figure, however: "Nearly 60% of global land deals in the last decade have been to grow crops that can be used for bio fuels, says Oxfam." Thus, America's own Renewable Fuel Standard which mandates 13 BILLION gallons of bio fuel be produced in 2012 as a way to reduce greenhouse gas emissions and foreign oil imports has contributed to the world's inability to produce food for human consumption.

The silver lining for the U.S. and the world is that the policy can be reworked or completely revoked. It's clear that one of the two needs to occur, and quickly.

As has been a common theme of the Mitt Romney campaign, seemingly sound political moves have turned into unequivocal political nightmares . In a new political ad that will run in swing states Virginia and Ohio, Team Romney pulled video footage from a recent Ohio rally that shows Ohio coal miners flanking the presidential candidate as the ad goes on to blast President Obama for "ruining the coal industry."

Not only do many of the coal miners look unenthused about participating in the rally, they apparently had little reason to be. According to Politico, "they [the coal miners in the ad] were pulled out of the mine to join the Republican candidate" (i.e. forced to take the day off without pay). Do you mean to say that Romney forced workers out of a job (snark!)?[1]

Of course, the free market has ruined the coal industry, not President Obama[2]. Given Mitt Romney's supposedly free market beliefs, one would think that the former Bain Capital CEO would have few qualms about the cheap flood of natural gas that has pushed coal to second-class status as a source of energy. 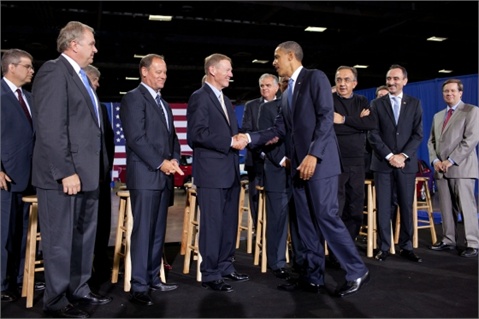 With regards to human and environmental health, Mitt Romney is unequivocally on the opposite side of each and his stance on President Obama's "extreme" fuel efficiency standards for trucks and cars is no exception.

Romney has publicly slammed President Obama's fuel efficiency standards on numerous occasions in 2012 (all Romney positions should be dated to give everyone a better idea of which "Mitt" is being referred to). Romney told The Detroit News in June that he would look for "a better way of encouraging fuel economy" than the Corporate Average Fuel Economy (CAFÉ) requirements.

More recently, a spokesperson for Romney reemphasized his opposition to CAFÉ requirements, claiming that savings accrued from CAFÉ "will be wiped out by having to pay thousands of dollars more upfront for unproven technology that they may not even want." Could it be that the Romney campaign is being disingenuous, again? Of course!

Even according to the automaker-bankrolled Center for Automotive Research, 56 mpg would help consumers save enough on gas to pay for the increased vehicle prices within 3 to 4 years of ownership. Whoops! Another Team Romney oversight, perhaps?

Until the Democratic and Republican Conventions, discussion about climate change had been almost nonexistent. It was during the conventions that President Obama and Willard the climate change denier crossed verbal swords in a fight over the presence of man-made climate change.

In his charmingly uncharming way, Romney joked about President Obama's efforts to halt man-made climate change at the Republican Convention, stating that "President Obama promised to begin to slow the rise of the oceans and heal the planet."  Ha...ha...ha. Maybe Romney has hedged his bets in favor of our planet's destruction.

At the ensuing Democratic Convention the following week, President Obama admitted that he would continue to support policies combating climate change. President Obama noted, "Yes, my plan will continue to reduce the carbon pollution that is heating our planet...". How dare our president attempt to do the right thing!

Climate change and its terrible effects are hardly a laughing matter. Yet Mitt Romney does it with such an alacrity that I often wonder if he believes other people actually matter.

How far has America stepped away from even the veneer that honesty and integrity are essential attributes of our country's elected officials, especially those poised to capture the highest political office in the country? Am I wrong to even assume that these attributes were even once important to Americans? If I am right, then Mitt Romney's serious candidacy for presidency of the U.S. flies completely in the face of this assumption.

Mitt Romney is a man who lies through his teeth at the drop of a dime (or in his case, a bar of gold). Sure, all politicians stretch the truth from time to time (some more so than others) or even sometimes outright lie. But I will argue that there is, among the vast majority of politicians, some foundation of beliefs that will not and cannot be compromised (maybe not Cantor though).

Then there's Mitt Romney, a man seemingly motivated only by the lust for the highest political office in the world, the U.S. presidency. Having established and succeeded at Bain Capital (to the chagrin of thousands of U.S. workers), Romney's exit appears to have signaled his ambition to tackle another spot on his checklist for power, the White House. With his considerable wealth in tow, it was time to take the game to the next level.