Okay, Yeah, Richmond is Burning, But What About My Crosswalk?

Cindy - February 9, 2019 0
I was having a meeting with Senator Saslaw today, and at the end, he asked if I’d mind going along on a quick stop... 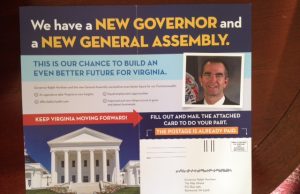 A Mailbox Filled with…Something or Other from “Virginians for a Better...

A Siegel - January 30, 2018 4
During the Virginia 2017 Democratic Party primary, one day I received a striking set of pamphlets in the mailbox that I summarized as "the...

Wow. The environmental threat of mining uranium in central Virginia, near water sources that quench the thirst of Hampton Roads and the first time such mining will have been attempted on the East Coast, has elicited stances from some politicians the opposite of what I expected. I never would have believed that the Democratic minority leader of the State Senate, Dick Saslaw,  in support of mining, would ridicule all concerns for the environment by saying he wouldn't be around in a hundred years, so he wasn't going to worry about future generations. But, to his eternal shame, that's what he said.

My own state senator, a right-wing Republican guy I have never agreed with in the past, Ralph Smith, voted "no" on lifting the moratorium, and he made perfect sense in his reasoning why. He said there are simply too many unanswered questions about the containment of radioactive tailings for him to vote to end the moratorium.

Smith said, "If I'm the guy building that [containment] liner and paying for that liner, I don't want to spend any more than I have to. If I'm the neighbor, I want it really thick. I think that [environmental regulation] needs to be decided first, then bring it to us and we will vote."

Saslaw's comments showed a callous, self-serving, short-sighted disregard for Virginia and for the public health of its citizens. The fact that he and his family don't live near the proposed uranium mine should have nothing to do with such an important decision. If I've ever seen a DINO who needs to have a primary opponent, it's Dick Saslaw. According to VPAP, the industries that donated the most to Saslaw's re-election in 2011 were energy and natural resources. I think I smell a connection.

At the very least, the regulations that will govern such mining, as well as the specific details of any mining operation and how environmental regulation would be paid for, should be spelled out before any vote to go forward with mining.