The Groan-Inducing Right-Wing Battle Cry of “SOCIALISM! LOLVENEZUELA!”…and How to Address...

Kellen Squire - August 21, 2018
4
by Kellen Squire Well, it's a day that ends in "y," so it must be a time for another Republican to cleverly go "LOLVENEZUELA" when...

Brandon and Davis Save the World- How Two Fairfax Dems in...

Kellen Squire - May 18, 2018
3
by Kellen Squire From the time I first announced my run for the Virginia House of Delegates last year, I knew I had an uphill...

We take these burdens so others don’t have to.

Kellen Squire - November 2, 2017
1
by Kellen Squire Anyone who works in emergency services knows that there are a lot of days where you spend almost as much time being... 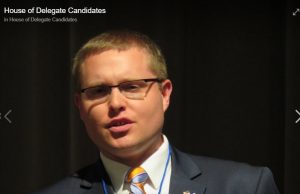 A Charlottesville ER Nurse Speaks After a Day of Decompression.

Kellen Squire - August 13, 2017
3
by Kellen Squire I’ve sat here at my keyboard staring at the blinking cursor for awhile. There’s words inside me that need to come out...

I’ve Made Up My Mind: Herring and Chopra

It took a long time for me to determine who will get my votes in the upcoming Democratic primary, but I finally know.  Both races on Tuesday are extremely dependent on voter turnout, and I firmly believe it will be low at best, and dismal at worst. There just haven't been any stark differences in policy positions between candidates for lieutenant governor and attorney general, so voters, including me, will probably decide on other factors.

In the contest for attorney general, I clearly thought from the start that Mark Herring was the stronger candidate.  I still believe he is. Justin Fairfax might be a fine candidate under different circumstances, and he has a bright future ahead of him if he continues in politics. (I certainly hope he does.) However, we need to choose the candidate right now who can clearly beat Mark Obenshain and put an end to the reign of right-wing lunacy that began in the attorney general's office with the election of Ken Cuccinelli. That's Mark Herring. He's capable of running a campaign that will win in November.

The race for lieutenant governor took me far longer to decide. Ralph Northam brings a couple of important strengths to the fall ticket. He's from eastern Virginia and can draw votes from that area, as well as having a powerful appeal to women voters tired of the Republican "war on women" in Virginia. Northam is also the "establishment" candidate of the party. His threat to bolt the party years ago evidently has been forgiven and forgotten by the powers that be since it hasn't played much of a role in the primary campaign.

In contrast, Aneesh Chopra has brought fresh, new ideas to the campaign and also would add diversity to a ticket that otherwise would have none. I have been most impressed by Chopra's understanding of how Virginia can use technology, renewable energy, etc., to grow the state's economy and produce well-paying, middle-class jobs. From what I've heard, Chopra has not only held his own in debates with Northam, but he has changed minds and garnered votes from those who were undecided. I guess the thing that finally helped me decide was NLS reporting that in Arlington Northam "actually stood up and said that he was unfamiliar with the issues around Interstate 66 and 'would need to do more homework' on that." That just won't fly in NoVA, where transportation issues are of great importance and I-66 is something every politician seeking votes there should be knowledgeable about. So, Aneesh Chopra will get my vote. His energy and enthusiasm, as well as his appeal to younger voters, will add real strength to the November ticket.

Mark me down for Herring and Chopra.