lowkell - June 25, 2019 1
See below for video and some highlights (bolding added by me for emphasis) of Rep. Abigail Spanberger (D-VA07)'s appearance earlier today on C-SPAN, where...

lowkell - April 6, 2019 2
by Lowell Here are a few national and Virginia news headlines, political and otherwise, for Saturday, April 6. "The thing about tax returns, is you can't...

lowkell - April 1, 2019 2
by Lowell Here are a few national and Virginia news headlines, political and otherwise, for Monday, April 1. Britain 'could leave EU by 22 May... 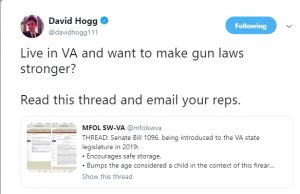