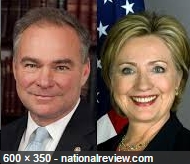 lowkell - July 22, 2016 4
Good question by Virginia Democratic activist J.C. Wilmore: Hypothetical question: if Tim Kaine gets the VP nod and Dems win 2016, who do the VA...

Steve Shannon: “This is not the time to shake a fist... In this morning's Washington Post, former Delegate and Democratic Attorney General nominee, Steve Shannon, has a powerfully argued op-ed on an important topic: "How to provide more help for unemployed Virginians". Here's an excerpt:

In the meantime, Gov. McDonnell should immediately make it clear to Virginia's congressional delegation and to the leaders of his party that he favors extending long-term unemployment benefits. As this newspaper pointed out in its July 13 editorial, "Unemployment benefits, which are most apt to be immediately plowed back into the economy, are about the most stimulative form of spending. Extending them is both fiscally sensible and morally decent."

The question is, is Bob McDonnell really "Bob's for Jobs," as he said in the 2009 gubernatorial campaign that he would be if elected?  So far, except for lavishing corporate welfare on his preferred industries - wine, oil, film, military-industrial complex - in return for a handful of jobs (at best), he sure hasn't shown it. How about, as Steve Shannon argues, first "find[ing] a way to say yes to helping citizens who so need our help?"

Leave it to Ken Kook-inelli to quickly take things down to the 3rd grade level. In this case, Cooch responds to a "pretty serious charge" about a possible "pay to play" scandal by having his political director call Steve Shannon a "sore loser." NLS makes a few good points about all this, the second of which ("what kind of Attorney General would even consider giving a comment from his political director to serious allegations of misconduct in office?") I particularly agree with. Meanwhile, Steve Shannon emailed me with his response:

"You know someone's in trouble when they're attacking the messenger, not the message."

Sadly, that's the Kook-inelli way. And, sadly, it often works. Let's hope Cooch doesn't get away with it this time, and that there's a serious investigation of Cooch's potentially serious allegations of misconduct committed while in office.

P.S. Where's Bob McDonnell on this matter? Cat got his tongue, or is he all talked out defending the corrupt "Jew counter" heading up his government "reform" commission?

"He's trying to build political power by publicly making Virginia hostile to the government of the United States," said former state Del. Steve Shannon, a Fairfax County Democrat who was soundly defeated by Cuccinelli last November in the election for attorney general.

"At 100 days, he's proven to be reckless, uninterested in good government and seems to be running for president of Virginia's far right. Other than that, what's not to like?"

Sadly, this is all too true. On the other hand, Cooch has provided a serious economic boost to one sector of our nation's economy - comedians - by making Virginia the laughingstock of the nation. The only problem is, the joke's on us. :(