Our socialist president did the unthinkable on Monday, he set up a council to restore the devastated ecosystems along the five Gulf States! The world is coming to an end!

On Monday, President Obama put his John Hancock on an executive order creating the Gulf Coast Ecosystem Restoration Council to "oversee" restoration activities bankrolled by new legislation that designates 80 percent of the 2010 BP oil spill fines to the Gulf States.

As if this incredible act of concern for the environment weren't bad enough, President Obama will also name the Department of Agriculture and the Environmental Protection Agency to act as the appointed federal trustees for a separate council created to evaluate environmental damage from the BP spill and make recommendations for mediation projections. How dare this president assign relevant agencies to undertake important tasks!

Tony Hayward is stepping down as BP's CEO to move to another role within the company, getting an $18 million golden parachute as he goes. BP is hoping Gulf Coast residents will view his replacement, Bob Dudley, more favorably in part because he's an American who lived in Mississippi for a time.

Yet the very next day, BP is continuing to use Hayward's rhetoric. A researcher on BP's payroll predicts the BP oil disaster's impact will be "quite small." Hayward himself once infamously predicted the impact would be "relatively tiny."

Last night I was at happy hour with friends talking about the disaster. "This is what BP doesn't get: We don't hate Tony Hayward because he's British," one of my friends said. "We hate him because he [screwed] the Gulf Coast."

BP dumping its CEO but continuing its lies changes nothing.

Play the BP Offshore Oil Strike Game! Fun For the... Prepare for a Gulf “Dead Zone” 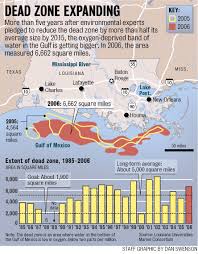 As if the new projected costs of the Deepwater Horizon BP disaster isn't enough bad news, here is a newly released report on a persistent toxic zone.  Not yet confirmed publicly, an oil insider is reporting a "dead zone:"

Sources at the Federal Emergency Management (FEMA) and the US Army Corps of Engineers are predicting that the BP Gulf oil gusher will create a "dead zone" within a 200-mile radius fromm Deepwater Horizon, says The Wayne Madsen Report for OilPrice.com for 23 June 2010. The sources report that Corexit 9500 oil dispersant used by BP has mixed with evaporated water from the Gulf, been absorbed by rain clouds and created

"toxic precipitation that threatens to continue killing marine and land animals, plant life, and humans within a 200-mile radius of the Deepwater Horizon disaster site...Adding to the worries of FEMA and the Corps of Engineers is the large amounts of methane that are escaping from the cavernous grotto of oil underneath the Macondo drilling area of Gulf of Mexico."

Do As BP Says, Not As It Does? BP Has New Plan To Distract Us From How Screwed We... [BP Managing Director] Bob Dudley said there was a greater chance of success with this operation  than with the "top kill" procedure that was tried last week.

"This is a better chance, definitely better. We're not working with  those high pressures and pumping that we weren't sure we were able to  even connect up. The guys that are running the robots, this is something  that they know how to do. The cutting is probably the critical piece.  We may have to try a couple of blades to do it. But from an engineering  sense, this is much more straightforward.

If this plan was really so much better than the "top kill" scheme, wouldn't BP have done this a lot sooner? Of course. Because this plan has one major drawback -- it inherently has to make the gusher a lot worse before it has any chance at all of making it better:

The BP platform fire and subsequent oil spill is not the first time there has been an offshore spill of this magnitude in this hemisphere. On June 3, 1979, a Petroleos Mexicanos (PEMEX) exploratory well 2 miles below the water surface in Bahia de Campeche had a massive blowout. Just like the BP exploratory platform, the oil and gas blowing out of that well ignited, setting the platform on fire. Again like the BP platform, that platform collapsed into the wellhead area.

As I read about efforts to contain the massive environmental damage in 1979-1980, the measures sure sounded familiar: submersible submarines, booms, skimming equipment, pumping mud and debris into the wellhead, use of toxic chemical dispersants, finally the drilling months later of two relief wells.

Here's my question for the off-shore oil industry: If this happened before so long ago, why the H*** didn't you learn better ways to contain such a catastrophe in the 31 years since? (Perhaps because long ago you had bought yourself - through that infamous "access" that campaign contributions buy - a $75 million limit on the damages you cause?)

What Do BP Oil Spill & Offshore Drilling Jobs Have In...

Nobody can provide an accurate estimate for either one.

On the same day BP finally admitted its figure of 5,000 barrels per day lowballs the actual size of the spill, the Newport News Daily Press reported Gov. Bob McDonnell may be playing games with offshore drilling job creation estimates:

Even before the Defense Department made known its objections to offshore drilling in Virginia, Bob McDonnell raised eyebrows with a letter he sent to the Interior Department in December.

The letter cites a 5-year-old study that predicts offshore natural gas production alone would generate 2,578 jobs in 10 years. That the then governor-elect would quote the study surprised its author, former Old Dominion University President James Koch, who called the document a "flyover from 30,000 feet."

"I've told them they shouldn't make too much of something done over the weekend," Koch said. "I don't even put that on my [curriculum] vitae."

So how many jobs would offshore drilling create in Virginia?