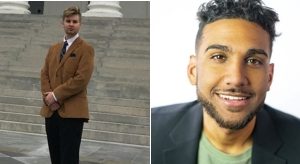 lowkell - January 18, 2020
0
Very interesting Gene Rossi Show today, with a great lineup of guests and lots to talk about. Two of those guests were political gurus...

Kellen Squire - July 15, 2019
1
by Kellen Squire Listen- I know it's early. A little under six months until the Presidential primaries are underway; a full year until the Democratic...

A Foolish Inconsistency of the House Democrats

Andy Schmookler - June 7, 2019
0
Before we get to our feature film, here’s a selected short subject that’s related. Nancy Pelosi is in the news these days primarily for her...

Can the Democrats Find Their Churchill for 2020?

Andy Schmookler - March 31, 2019
29
When we look at the absolutely crucial role that Churchill played -- from the time Hitler arose in Germany to the time that Hitler’s...

Andy Schmookler - March 2, 2019
9
I have really no idea whom I'm going to support in the Democratic primary field. I can't recall the picture being so blurry to...

President on the Lam? Another Strong Reason to Indict this Sitting...

Andy Schmookler - February 26, 2019
4
MSNBC host Nicole Wallace reports from her contacts, “I understand his chief motivation for running for re-election is to avoid possible indictment and legal...

2020 Foresight: Winning Must Be the Main Criterion for Dems’ Choice

Andy Schmookler - February 20, 2019
5
I’m concerned about whether Liberal/Democratic America is going into this new presidential election season in the right frame of mind. Whether my concerns are well-grounded...

Poetic Justice: How Democrats Might Make a Kavanaugh Confirmation Backfire on...

Andy Schmookler - September 25, 2018
4
As of this writing, the futures market deems it exactly a 50-50 proposition whether Brett Kavanaugh will be confirmed. My hope, of course, is that he...

An Invitation to National Democratic Leaders– and a Two-Fer for the...

Andy Schmookler - August 27, 2018
7
The most pressing political task now facing us -- "us" meaning all Democrats, and indeed all Americans who understand the current threat to American...

Teddy Goodson - May 21, 2010
3
The Conventional Wisdom, repeated ad nauseum is that America is a center right nation, the corollary being that, if those lefty Democrats want to win elections they have to "move to the right," and if Obama ("the most extreme radical leftist President ever") is to have a prayer of passing any kind of legislation he'd better drop this socialist garbage and start acting like a Republican.  You know, that Republic Party representing the majority of Americans, ahem. This CW is displayed front and center day after day on the mass  media, repeated so often that most national Establishment Democrats believe it themselves, and it looks as though even President Obama swallowed the CW hook, line, and sinker, as he strove to re-create a bipartisanship in Congress which in reality had frayed apart long ago, and which most certainly became a total dead letter upon his election.

How, then, is it that Barack Obama, that "radical leftist" ever got elected in the first place? How, in heaven's name, did he carry so many so-called Red States, including Virginia---- which promptly turned around two years later and elected a hard right conservative (masquerading as a moderate) as Governor, and an Attorney General openly so far over the cliff on the right he is almost certifiable? Why is it there is such a powerful, reactionary movement like the Tea Party dominating the public square and, it seems, the Republican Party?  Why do I have the gall imagine that America is not center right, but center left?