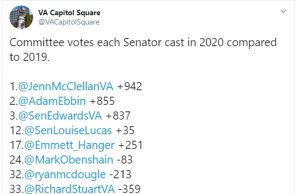 Which Virginia State Senators Took the Most/Fewest Committee Votes in 2020?...

lowkell - March 15, 2020 0
See below for some interesting stats, courtesy of @VACapitolSquare. For the source of these numbers, see the Virginia Legislative Information System (LIS) page on... 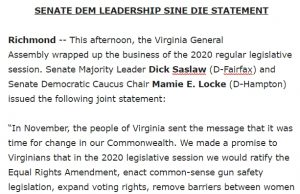 Blue Virginia - March 12, 2020 0
From the Virginia Senate Democratic Caucus, following what was by any standard an historic session. SENATE DEM LEADERSHIP SINE DIE STATEMENT Richmond -- This afternoon, the Virginia General... 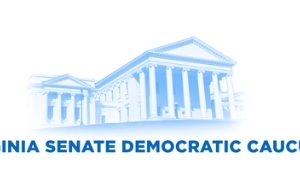 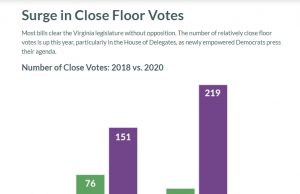 Graphics: At Halfway Point of 2020 Virginia General Assembly Session, ~Half...

lowkell - February 14, 2020 0
See below for two interesting graphics by VPAP, looking at how legislation is faring at the halfway point of the 2020 Virginia General Assembly... 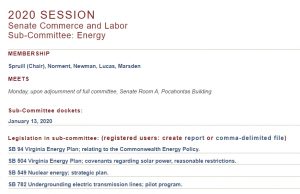 We Could Start Finding Out on Monday Afternoon Where the State...

lowkell - January 11, 2020 1
There have been thousands of bills filed so far in the 2020 Virginia General Assembly, on every subject under the sun, and  the job... 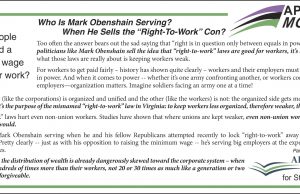 Calling Out Mark Obenshain (and the Republicans) on Their ‘Right to...

April Moore - August 31, 2019 2
by April Moore In honor of Labor Day, I would like to share another of the ads I've been running in my campaign against Mark... 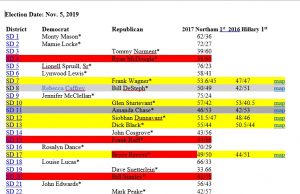 Getting Ready for 2019: Virginia Senate and House Districts We Can...

Many of you have been bombarded with pleas for money to help Democrats regain the Virginia Senate majority; a noble cause. Well, you should ask three questions before you contribute a dime: Is there a strategy for success? Where is your money going to end up? Will you suffer remorse?

On this or another of Lowell's blogs, I asked at the end of one particularly disappointing campaign where I go to get a refund of my contributions. After that campaign I decided that I wouldn't contribute to any campaign whose candidate doesn't share my core values and doesn't have a chance in hell of being victorious. In the special election for Phil Puckett's abandoned seat, the Democratic candidate fails quite possibly both criteria. I say quite possibly because we may never know what the insiders now know from polling in the district. Frankly, if I were to venture a guess, I'd bet he is at the general starting point for the generic Democratic candidate in the region: 37%. And, we already know he is joined at the hip with coal. That's a pragmatic position; I understand that. But he is unabashedly supportive; his position is not nuanced in any way. I can tell you I won't regret not contributing on both counts.

I have also learned not to contribute to any committee that claims to support my candidate(s). There are simply too many ways my contribution won't end up in my candidates' coffers. The Virginia Senate Democratic Caucus funneled $410,168 to Phil Puckett in 2011; the 3rd highest individual beneficiary. That would mean that of each dollar from that group that went to an actual candidate, 13.9% went to Puckett. Oh, and in any case only about 49% of all Caucus expenditures went directly to Virginia Senate candidates even when including a big chunk, $224,500, which went to an independent candidate in the 19th. But it's a broader issue. Your direct contributions to other candidates also ended up in Russell County: $15,000 from Chap Peterson; $5,000 from Dick Saslaw; $2,500 from Janet Howell; $1,000 from Don McEachin. I have contributed to at least one of them; I never will again. I don't need them deciding my money should go somewhere I didn't send it. Note that it is not only the Senate Caucus and not just at the state level where this is a common betrayal.

However, it is the strategy for regaining control of the Senate that concerns me most. The focus right now looks extremely tactical: fight the good fight in the 38th. But I believe Sun Tzu would advise differently. You don't reinforce failure; that is complete folly. I have met some great Democrats in the 38th, but even with the power of incumbency, Phil Puckett won that district with 53% of the vote after spending $1,365,143. He outspent his opponent by about a quarter million dollars. We Democrats are in no position to raise the amount of money that it will take to pretend we might win the 38th. And when that cash we don't have is gone, where does that position us for the races in 2015?

On election night 2015, we shouldn't be wondering if the money we wasted in 2014 could have turned a red tide in the Virginia Senate. In 2015 if we choose wisely we might even gain a seat or two for the high price of none in 2014.

GO WISCONSIN ON THEIR A*%!

totallynext - February 18, 2012 0
So I was reading the recent post by the Virginia Democratic Senate Caucus.  What Capital Square does Governor McDonnell live on?   First - no one paid attention to that diary - get a better title!  I posted a comment - but then thought this is so gonna go unnoticed - time for a diary
12Page 1 of 2