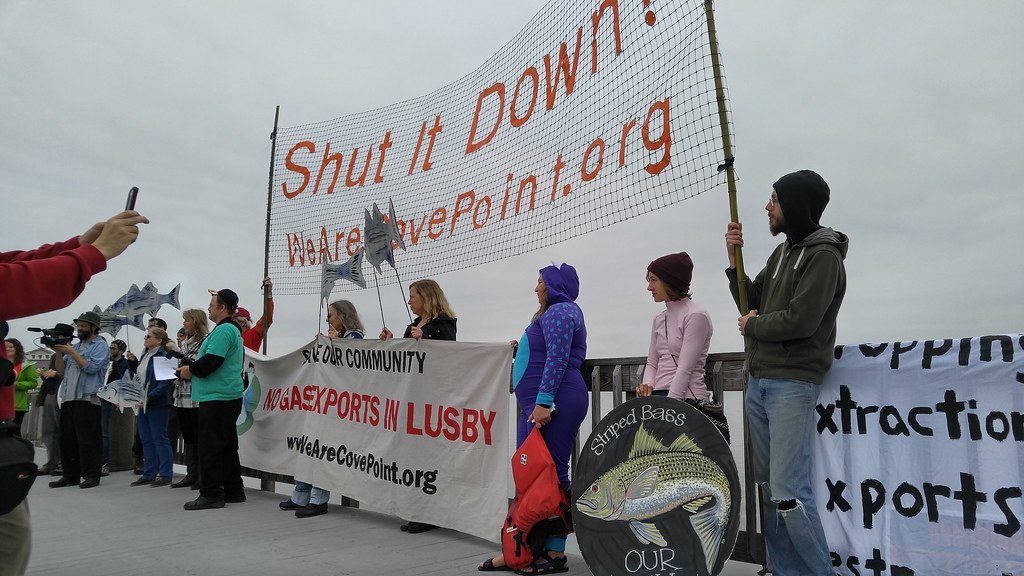 We Are Cove Point, SEED, the Backbone Campaign and other groups from the mid-Atlantic and beyond gathered in kayaks and on land to show opposition to Dominion’s fracked gas terminal and the impacts it has on communities.

Solomons Island, MD — In protest of the construction of Dominion’s liquefied natural gas export terminal, dozens of activists and community members held a rally on March 13 on the boardwalk at Solomons Island that was accompanied by a flotilla of kayaks in the Patuxent River. Among those assembled were people fighting LNG export terminals in Texas and Oregon, as well as those fighting fracked gas infrastructure throughout the mid-Atlantic. The action was organized by a coalition of groups that coalesced at the recent Cove Point Spring Break camp, including We Are Cove Point, SEED, the Backbone Campaign and many others.

People convened at Solomons Island to emphasize the importance of protecting the water and our communities. Solomons Island is the primary tourist area in Southern Maryland, and has been impacted by Dominion’s “Offsite B” construction area right at the entrance to Solomons. Dominion notoriously destroyed oyster beds in the Patuxent to construct its pier next to the Thomas Johnson Bridge, which connects Calvert and St. Mary’s Counties, and has made life more difficult for residents along Cove Point Road and elsewhere near its terminal construction in nearby Lusby.

“I came to Maryland because the courage of the people fighting Cove Point is known throughout the United States, and I wanted to lend support first-hand from the people in Oregon working against the same brutal industry,” said Ted Gleichman, a volunteer leader in national and Oregon Sierra Club chapters who has been fighting the LNG export terminal and pipeline at Jordan Cove in Coos Bay, Oregon, that was rejected this week by the Federal Energy Regulatory Commission.

“We’ve been watching this situation in horror because the Cove Point project is so egregious. The fact that Dominion is willing to endanger the life and property of the surrounding community has taught those of us in other LNG frontline communities that this is being regulated by a system that is unwilling to act within the best interests of people,” added Stefanie Herweck, a resident of a community fighting multiple LNG export terminals in deep south Texas.

“Just because they’re not currently fracking in Western Maryland doesn’t mean the impacts of fracking don’t affect myself and those around me,” said Gabriel Echeverri, a Western Maryland farmer, botanist and activist also at the rally. “I can drive five miles north and be at a fracking well in Pennsylvania. I can drive five miles south and be at a fracking well in West Virginia. If the Cove Point LNG facility goes on line, that gas will come out of the ground and go past my home on its way to Cove Point. That, in addition to the negative effects of the Cove Point LNG facility, have boxed us in to a place where we feel the need to act — not just on behalf of our own homes, but the homes and land of those across the region who would be impacted with us.”

After recent toxic oil and coal ash spills in the region caused by Dominion, as well as lawsuits seeking non-consensual access to private property in Virginia to survey for massive pipelines, and the constant impacts of construction on southern Calvert County residents, Dominion has made countless people feel fed up. Organizers estimated 700 people participated in a “Dump Dominion” march in Richmond, Virginia, on February 20 over the issue of Dominion wanting to dump millions of gallons of coal ash-laden water per day into Virginia rivers.

Around 130 people attended Cove Point Spring Break, a camp held this past week in Southern Maryland to bring together people fighting natural gas infrastructure projects. Panels included focuses on environmental justice, Pennsylvania pipelines, Virginia and West Virginia pipelines, the Cove Point terminal, and a “Connecting the Dots” panel that featured people working to stop the gas industry on each level, from fracking to pipelines to compressor stations to exports. The Backbone Campaign came from the Puget Sound in Washington to teach “kayaktivism” tactics, and other workshops covered organizing skills, action trainings and issues-based discussions.

Today’s rally was a message that people won’t stand by as their communities are overrun by corporations looking to make a profit at the expense of our health and well-being.

More information about Cove Point Spring Break can be found at www.covepointspringbreak.org.