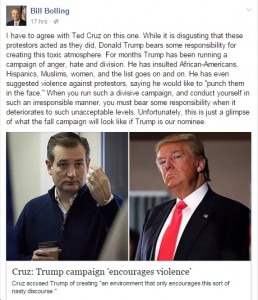 Yesterday, former Virginia Lt. Gov. Bill Bolling posted the latest of numerous Facebook entries criticizing Donald Trump. For instance, about 9 days ago, he posted that it was “painful to watch” the “all out civil war taking place in the Republican Party” due to Donald Trump, and asserting that “[i]f Trump wins the nomination, many longstanding Republicans will not support him.” Bolling’s latest post, ripping Trump’s “campaign of anger, hate and division,” as well as the fact that Trump “has insulted African-Americans, Hispanics, Muslims, women,” and “even suggested violence against protestors.”

So what’s missing in all that? Simple: an answer to a question that flows naturally from the correctly labeling Trump for what he is. That question, as I put it to Bolling on his Facebook page yesterday, is: “So…if Trump’s the GOP nominee, what will you do? Vote for him? Vote for the Dem nominee? Stay home? Other?” I’ve asked Bolling variants of this question previously, and never received a response, and I still haven’t received one for my question yesterday.

Why not? Is this really THAT difficult? I mean, if you’ve gone so far as to correctly identify Trump as a cancer on your party and on the country — something Bill Bolling and other Republicans certainly have done — how can you not take the next, logical step and state unequivocally that under no circumstances will you support this neo-fascist thug and bigoted sociopath and demagogue for president? Does loyalty to the “red team” trump (pun intended) loyalty to your country? Because if Trump is as bad as many Republicans say he is, then he’d take this country we all love – and likely the rest of the world as well – down the path of ruin. So what are Bolling and others waiting for?

By the way, on a related note, I saw my friend Karen “Anonymous is a Woman” Duncan’s comments on Facebook about how there’s a right-wing “meme…going around that the violence at Donald Trump rallies is actually the fault of radical leftists and especially of Bernie Sanders supporters. Or of Obama. Take your pick.” According to Karen, this is almost the textbook definition of psychological projection: “Whatever the Republicans accuse others of is a tell. It’s what they themselves are doing or intending to do.” Karen concludes: “Republicans claim they want personal responsibility. That starts at home. It’s time for them to demand that Donald Trump start taking responsibility for the toxic and violent atmosphere at his rallies. Trump is the only one responsible for the violence at his rallies.”

As she usually is, Karen is absolutely right about this. I’d simply add that it’s far from sufficient for Republicans to demand Trump take responsibility for fomenting violence. It’s also time for them, as noted above, to state uniequivocally that they WILL NOT SUPPORT TRUMP if he becomes the Republican 2016 presidential nominee. Their alternatives? They can form a third party, vote for another candidate, or stay home on election day. But if they vote for the neo-fascist bigot, then we can only conclude they agree with that neo-fascism and bigotry.