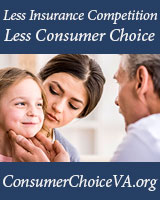 Good stuff from the Virginia Campaign for Consumer Choice.

RICHMOND – Today the Virginia Campaign for Consumer Choice is launching to advocate for a transparent and accountable public review process for the proposed mergers of health insurance companies Anthem and Cigna as well as Aetna and Humana. The Virginia Campaign for Consumer Choice brings together supporters demanding that the pending mergers are subject to a public review process and accountable to the consumers who could be impacted by the changes. Virginians who could risk losing consumer choice and face rising costs deserve to be informed and involved in this critical decision.

“The Virginia Bureau of Insurance is Virginia’s consumer watchdog and we must ensure the Bureau is doing its job to protect Virginians’ rights to health care and closely monitor the mergers. The bulk of residents and businesses in Virginia don’t have many insurers to select from—their choices may be further restricted if these mergers are approved.” – Senator Scott Surovell

In Virginia, where Insurance Commissioner Cunningham has recently agreed to hold a hearing for the Anthem-Cigna merger, the Campaign for Consumer Choice is drawing attention to the hearing to ensure the consumer perspective is heard. The Campaign kicks off with today’s announcement with Virginia legislators and advocates and a digital advertising program to raise public awareness.

“These are major mergers that could lead to increased premiums and other impacts on care for Virginians. We must ensure that if these deals go forward, competition in the marketplace remains strong and consumers continue to be protected. Making every effort to ensure that consumer voices are heard as a part of this process is important.” – Delegate Alfonso Lopez

“Consumers should have the right to learn how the proposed mergers of Aetna-Humana and Anthem-Cigna will impact their loved ones, themselves, and the marketplace overall. Virginians deserve an open and public review process to express their support or concern and have their opinions taken into consideration.” – Karen Cameron, Virginia Consumer Voices Director

Modern Healthcare has reported that if Anthem were to acquire Cigna, combining the second and fourth largest insurance companies, the deal would be worth $54.2 billion. The price of the Aetna-Humana deal, merging the third and fifth biggest insurance companies, will be roughly $35 billion according to the Associated Press. These mergers, if unchecked, could threaten the competitive landscape in the healthcare industry which could lead to higher costs, lower quality, and less consumer choice.

“Virginians will be directly affected by health insurance plans, policies, and premiums and should be involved in the review of the mergers throughout the process. We appreciate that the State Corporation Commission is planning a hearing on May 25th, and Virginia Organizing will continue working to make sure all Virginian voices are heard.” – Virginia Organizing State Governing Board Treasurer Ray Scher

Today’s campaign launch is not the first time concerns have been raised among consumer advocates on these mergers. In January, advocates across the state submitted a letter to Commissioner Cunningham detailing the request for increased transparency, public input and consumer safeguards.