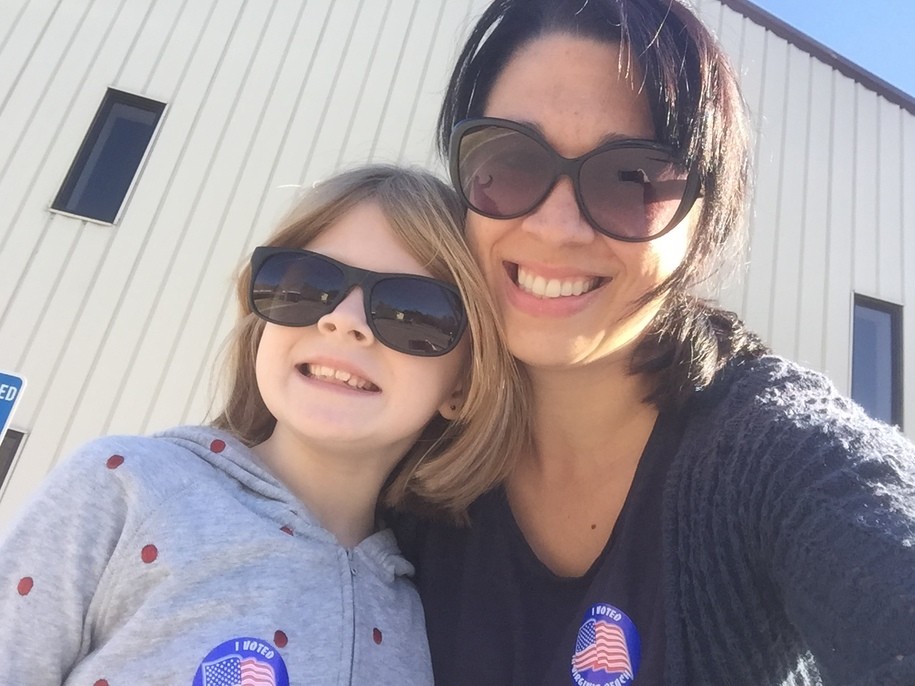 After the November 2016 election, I went through a grieving process. I was confused, but mostly I was angry and sad. I was finally able to begin to accept the new world my daughters and I were living in when I decided to increase my involvement with politics, to get active beyond voting. I researched like crazy, trying to understand what was happening in our government and what could happen. I decided then that I would never again allow myself to be complacent.

My previous silence was complacency.

My lack of active participation had given permission. I was now determined to have an increased role in the making of the laws and regulations that govern my community, state, and nation.

In early January, Virginia’s General Assembly was back in session creating and amending Virginia’s laws. I read about an upcoming resolution to call the anniversary of the Roe v. Wade decision the “Day of Tears,” which was proposed as a day to mourn legal abortions that have been performed since the Supreme Court ruled in favor of women’s right to choose on January 22, 1973.

Recognizing January 22 as the Day of Tears in Virginia.

WHEREAS, on January 22, 1973, the majority of the members of the Supreme Court ruled that abortion was a right secured by the Constitution; and

WHEREAS, since that fateful day, over 58 million unborn children have perished; now, therefore, be it

RESOLVED by the House of Delegates, That January 22 hereby be recognized as the Day of Tears in Virginia and that the citizens of the Commonwealth of Virginia be encouraged to lower their flags to half-staff to mourn the innocents who have lost their lives to abortion.

When I saw the proposed resolution, I did not think it would actually pass because I could not imagine legislators asking the state to shame women and their partners who have made, sometimes agonizingly, the difficult decision to terminate a pregnancy. But just to be sure I was being an active participant in the process, I reached out to my State Delegate, Ron Villanueva, to ask him to vote “NO” to the Day of Tears Resolution. I did not get any communication from him or his office in return. And on January 18, 2017, Villanueva voted “YES” to this extremely hurtful resolution, and it passed. I could not imagine how much pain this must have caused to so many, including those who felt conflicted when terminating their pregnancy but who, for whatever reason, felt they had no other choice.

When I reached back out to Delegate Villanueva to ask WHY he had voted in favor of such a blatant attempt to shame women, I again received no reply whatsoever. Here I was, his constituent, volunteering my time, being a concerned citizen by reaching out to my legislator, and yet he refused to acknowledge my concerns or to explain why he had voted the way he did. I determined at that point that he should be held accountable for the vote. He needed to answer for it.

Villanueva does not hold town halls or reach out to the community for our input. He doesn’t know how we feel and evidently doesn’t care to know. I cannot understand how a “representative” of 80,000 people does not even want the input of the people in his district.

Now this all happened in mid to late January. Soon there was another life-changing event that contributed to my decision to run for Delegate – the Women’s March on Washington.

Inauguration day was usually a very exciting day for my family, every year actually, since my daughter Tessa Anne’s birthday is January 20, 2009, the day President Obama was inaugurated. But since the election, she had become pessimistic about the world and her future. Her attitude towards life had changed. She now no longer believed that girls could do or be anything they wanted, and she now felt she had to conform to a complex bunch of stereotypes and a world in which people can be mean and unfair. I felt I had to make her birthday really positive to turn it all around or she could be permanently jaded.

When I heard about the Women’s March, I immediately wanted to participate and thought it would be an empowering experience for Tessa Anne. The fact that it correlated with her birthday made it even better. My husband badly wanted to go with us, but he could not get off work. I planned to go up to DC on Friday, celebrate her birthday by taking her to dinner, and then attend the march Saturday. I had run across another mom that had a daughter with the same birthday and her daughter was also struggling with the effects of the election on her self esteem. I hoped the occasion would bring positivity to her birthday and, going forward, boost her morale and views about the world.

And, WOW, did I get more than I expected! The march was amazing and historic.

Tessa Anne and I were filled with positivity as we walked toward the meet up point with hundreds of our fellow citizens chanting, “My Body, My Choice.”  When we finally got to a place where we couldn’t move anymore, we realized we were joined by HUNDREDS of THOUSANDS of people! Young and old, male and female, people of all religious backgrounds, all races, and all ethnicities… we were all in this together.

Amazingly, we couldn’t really “march” because there was no room! There were literally too many people, and you can imagine how thrilled both Tessa and I were to be part of such a massive, peaceful show of solidarity! As we hung out in the non-moving crowd, talking to people and looking at all the signs, just soaking it all in, any chance Tessa Anne got, she would yell, “Fired up!” And the crowd would yell back, “Ready to go!”

Because of the Women’s March, Tessa Anne is more self-confident and determined than I have ever seen.

You might think that the March moved me to decide, right then and there, to run for office, but it was not until after a lot more reflection and discussion with my family that the light turned on in my head that this was something I should do.

Since I had lost faith in my representative to actually represent us and knew he was up for re-election this year, my focus shifted to making sure Villanueva was serving his last term as Delegate. I researched the election and other possible candidates. I looked into who endorsed Villanueva and at who his base of supporters were. I looked at his background and involvement in the community.

And then it hit me. I realized, much to my surprise, that I was an ideal candidate to beat Villanueva.

The climate is right because people are paying attention and becoming involved. Unlike Villaneuva, I will represent ALL the people in our diverse district, one in which Hillary Clinton defeated Donald Trump.

I have strong, lifelong roots in the community and a diverse educational and career background (former public school teacher, a small business owner, and a military family relocation specialist). Like many 21st District residents, I was born into a military family and understand what that means. And like far too many, I grew up in a family that lived paycheck to paycheck, and I know what it means to earn a living. I also know what it means to start a small business and understand the importance of growing and sustaining your business. Moreover, as anyone who knows me will attest, I am an energetic person with a long history of stepping up to help people in my community.

I may not have always been involved with the political scene, but this is ALWAYS who I have been.

I have always fought for what I believed was right and to help when the opportunity presented itself — whether that meant navigating my way through flood waters to assist a friend and her family during Hurricane Matthew, convincing New Castle Elementary to change the name of the Father/Daughter dance to Parent/Daughter to be inclusive to ALL types of families, or any of a long line of other actions I’ve taken to be the change I want to see in the world.

Like my daughter, I know in my heart that right is right and that fair is fair, and I have always lived those values.

So I am standing up and speaking out.

I ask for your support as I make this journey.