Today, Senate Republicans will publicly release draft changes to the House-passed Trumpcare bill to repeal the Affordable Care Act. Senate Majority Leader Mitch McConnell (R-KY) has said that he expects to vote on the proposal – a bill affecting one-sixth of the American economy that no Democratic Senators have yet seen and which was written in a secretive, backroom process by Republican staffers – next week.

While the legislation is expected to differ in part from the bill that passed the House on May 4, Republicans are expected to leave in place the vast majority of the House proposal, which independent experts have determined would result in healthcare coverage that covers less, costs more, and lead millions to lose coverage altogether – all while cutting taxes for the wealthiest Americans.

Below, you will find some relevant background to help inform any editorials you may write.

NO WAY TO LEGISLATE

This is not the way the Senate should work. Normally, the Senate would hold hearings—with experts, doctors, patients, and stakeholders – in full view of the American public. A bill would be worked up through committees and senators would have the opportunity to review the bill and suggest changes.

No – this isn’t “the same thing Democrats did.” When the Senate considered the Affordable Care Act, the Senate Finance and HELP committees held nearly 100 hearings and roundtables. Both committees considered hundreds of amendments and both accepted dozens of Republican amendments. Instead of an open, transparent, bipartisan process, Senate Republicans developed their proposal in secret. They are planning to jam through a bill that will have devastating impact on the health and financial security of people across the country without giving Democratic colleagues, states, stakeholders, consumers or patients  the opportunity to evaluate it.

In 2016, almost 400,000 Virginians purchased health insurance through the federal insurance marketplace. Of those who purchased their own insurance on the marketplace, 84 percent received tax credits to help lower their premiums, and more than half – 59 percent – received cost-sharing payments to help defray other out-of-pocket costs.

And older Virginians would pay even more. Trumpcare weakens the Affordable Care Act rule that limits how much insurers can raise prices based on age. Trumpcare would allow insurers to charge older enrollees five times more than younger enrollees starting in 2018 (versus the three times as much under current law.) Average premiums would increase for all ages starting at about age 46, and the AARP, among other consumer groups, has noted that this is an “age tax” for older Americans. The Senate’s version of the bill is also expected to allow higher premiums for older people. Under Trumpcare, a 64-year-old Virginian making $26,500 a year could expect to pay an age tax of$12,000 more for their health care premiums than under current law. Moreover, the elderly and disabled account for two-thirds of Medicaid spending; it will be difficult to protect this vulnerable population as Trumpcare massively cuts the Medicaid program.

Paying more for less coverage. Trumpcare will allow states to waive the requirement in the Affordable Care Act that insurance plans cover certain basic benefits, such as maternity care, prescription drug coverage, and mental health care. If Republicans in the state legislature eliminated federal essential health benefits, people would face “substantial increases” in out-of-pocket spending for these benefits, according to the CBO. The CBO says enrollees would face additional costs in the “thousands of dollars in a given year” for services such as maternity or mental health. Eliminating essential health benefits could affect nearly every Virginian, including those who receive health coverage through their employers.

Trumpcare also allows states to undo the protections that prohibit insurance companies from charging more for consumers based on their health status. Under that scenario, the CBO has said that “people who are less healthy (including those with preexisting or newly acquired medical conditions) would ultimately be unable to purchase comprehensive nongroup health insurance at premiums comparable to those under current law, if they could purchase it at all.” The alternative solutions put forward by Republicans – high-risk pools for those with pre-existing conditions – don’t work. Thirty-five states had them before the Affordable Care Act, and they were chronically underfunded, outrageously expensive, and provided insufficient access to care.

Trumpcare would blow a hole in Virginia’s budget. In FY 2016, Virginia received about $4 billion in federal Medicaid funds – 51 percent of the state’s funding for people covered by Medicaid. Virginia historically has run one of the leanest Medicaid programs in the country, with lower reimbursement rates than many other states. But as a result of the steep cuts to Medicaid in Trumpcare, Virginia would be forced to pick up an additional $900 million in costs for Medicaid over the next ten years in order to maintain the same level of care.

That would leave Virginia with three choices: (1) raise taxes; (2) cut funding from things like schools, roads, and economic development; or (3) cut benefits, enrollment, and/or reimbursement rates to hospitals and medical providers across the Commonwealth.

Medicaid cuts don’t just hurt the poor – they would also jeopardize care for children and middle class Americans. About half of all births in this country are covered by Medicaid. In Virginia, about one in three childrenrelies on Medicaid for their health care – which would be in jeopardy under Trumpcare.

Medicaid also covers the long-term care costs of two-thirds of Americans living in nursing homes, many of them middle-class Americans who spent all of their savings on care before becoming eligible. In Virginia, 15 percent of all seniors and people with disabilities rely on Medicaid for their care.

With an average of three Virginians dying each day from an opioid overdose, Trumpcare would also be disastrous for the battle against the opioid crisis. It could upend coverage for millions of Americans who are guaranteed access to behavioral health services, including substance abuse treatment, as a result of the Affordable Care Act. Medicaid is the primary payer of behavioral health services in the Commonwealth. 12 percent of adult Medicaid beneficiaries live with some form or a substance abuse disorder, and Medicaid finances one-third of the medication-assisted treatment administered for opioid and other substance use disorders in the country. All of that would be in jeopardy.

While Senator Warner is the first to acknowledge that Congress must act to improve the Affordable Care Act to encourage market stability and ensure greater affordability, actions taken by the Trump Administration are undermining our health care system.

Both public and private analyses released earlier this year showed that the individual marketplaces were relatively stable and improving, and that insurers, on average, were getting closer to break-even margins. A March 2017 analysis from the non-partisan Congressional Budget Office said that “under current law, most subsidized enrollees purchasing health insurance coverage in the nongroup market are largely insulated from increase in premiums…The subsidies to purchase coverage combined with the penalties paid by uninsured people stemming from the individual mandate are anticipated to cause sufficient demand for insurance by people with low health care expenditures for the market to be stable.”

An April 2017 Standard & Poor’s (S&P) report found that “2016 results and the market enrollment so far in 2017 show that the ACA individual market is not in a ‘death spiral.’” The analysis found the health insurance market is set for stability and profitability as long as the Administration is not “disruptive.” Despite the fact that experts have said the individual health insurance market has been showing signs of stabilization, moving toward profitability, the Administration and Congressional Republicans have put this progress at risk.

President Trump signed an Executive Order undermining the law. On January 20, 2017, his first day in office, President Trump signed an executive order telling federal agencies, to the extent permissible, to exempt, delay, or defer any Affordable Care Act provisions that impose a cost or penalty on individuals. Health insurers and experts have been clear that undermining the enforcement of the individual responsibility requirement will weaken the risk pool, which in turn drives up premiums. The Congressional Budget Office estimated that repealing this provision could raise premiums by up to 20 percent and that“substantial uncertainty about enforcement of the individual mandate” could lead insurers to withdraw from the marketplace.

The Trump Administration has deliberately undercut outreach and enrollment efforts. On January 26, 2017, the Trump Administration cut 75 percent of television advertising and all digital advertising for the final week of health insurance enrollment, resulting in an estimated 500,000 fewer Americans purchasing coverage. Based on previous open enrollments, the last week has been proven a critical time for enrolling younger, healthier enrollees. The U.S. Department of Health and Human Services Inspector General is now investigating the Administration’s actions to end outreach activities abruptly before the open enrollment period ended.

President Trump will not commit to making Cost-Sharing Reduction Payments, creating market instability. President Trump continues to threaten to withhold $7 billion in annual cost sharing reduction (CSR) payments that lowers consumers’ deductibles and co-pays. The National Association of Insurance Commissioners wrote in a letter to Office of Management and Budget Director Mick Mulvaney in May 2017 that “the uncertainty of this funding [CSR payments] could add a 15-20 percent load to the rates or even more.”

And you don’t have to take our word for it. The week before Aetna announced it would not be selling insurance plans in the Virginia market next year, the company’s CEO pointed directly to the Trump Administration’s threat to eliminate cost-sharing reductions as a move that put too much uncertainty into the system. He said he believes it’s time to admit that the ACA needs to be fixed, not repealed.

Senator Warner has been pressing the Administration for months to stop playing politics with the stability of Virginia’s healthcare markets.

But that’s not true – Senator Warner has proposed a number of commonsense improvements to the Affordable Care Act, to fix what isn’t working, and strengthen the parts that are helping Virginians access affordable, quality health insurance.

FIX IT, DON’T DITCH IT

Senators Warner knows that there is more to do to improve the health care system in our country, and stand ready and willing to work with anyone to improve the existing law to increase affordability for Virginia families. 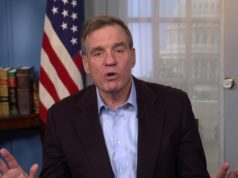 Video: Sen. Mark Warner Says Senior FBI Officials Repeatedly Reassured Him That They Were Prepared For Yesterday’s Threat – “They Were Flat Wrong”