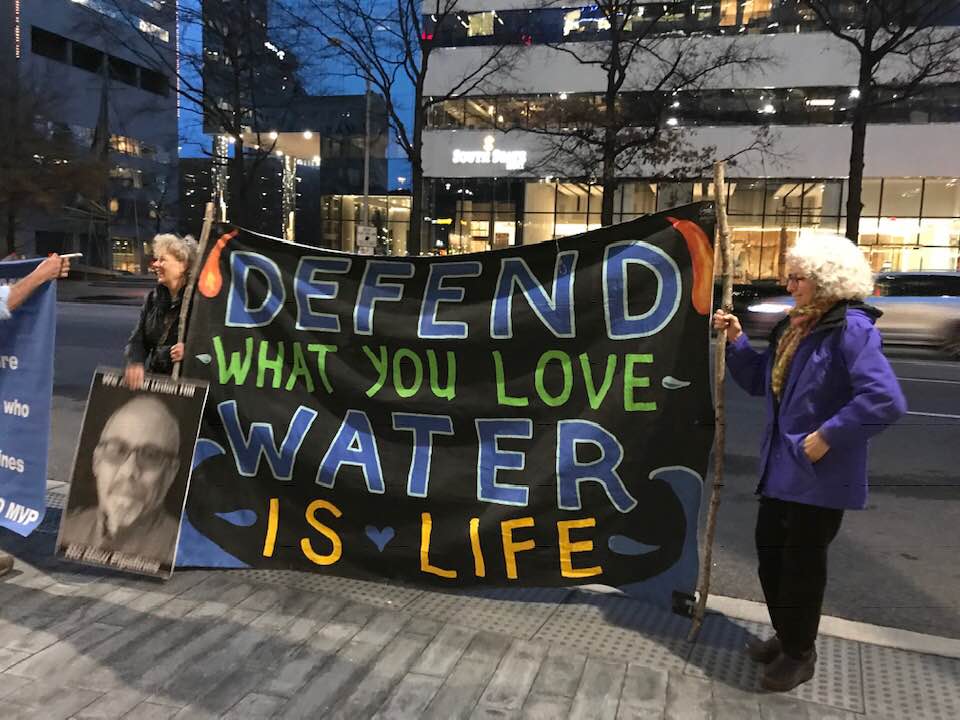 RICHMOND, Virginia– Virginians from across the state gathered in protest outside of a fundraising event co-hosted by Dominion executives and McGuireWoods, Dominion’s law firm, for Governor Ralph Northam’s PAC “The Way Ahead.” The group gathered with signs, large banners, and flashlights to “shine a light on corruption,” and the event included chants, songs and statements from residents impacted by corruption in Virginia’s regulatory system.

The demonstration was representative of the widespread demand for an end to Dominion and corporate influence in Virginia’s politics, and the action occurred with Dominion’s Atlantic Coast pipeline, EQT Corporation’s Mountain Valley pipeline, and Dominion CEO Tom Farrell’s coliseum plan as backdrops.  The group’s message, which echoed statewide sentiments, was this: “The type of corruption exemplified by this Northam-Dominion fundraiser will not stand. For all those hoping to be elected in the future, whether it be as a legislator or governor or the rest: If you want to be elected, you can’t accept money from corporations like Dominion, and you also can’t accept money from Northam’s “The Way Ahead” PAC or other PACs taking money from Dominion – pledges to refuse Dominion money mean nothing if the money is laundered in through corrupt politicians like Northam and other PACs.  In the face of the obvious negative influence of Dominion and corporate interests on our government and regulatory processes, the Air Board must deny the Buckingham compressor station air permit on January 8th, a stop work order must immediately be issued for the Mountain Valley pipeline and the pipelines’ 401 certification permits must be revoked, and Tom Farrell’s coliseum plan must be rejected.”

Speakers highlighted impacts on communities of the nefarious influence of Dominion and corporate interests over Virginia officials:

Richard Walker, an impacted community resident, spoke of Dominion’s divisive tactics, the potential impacts of the station, and also addressed Northam directly, “{Governor Northam}needs to get out of the pocket of Dominion Energy…This monstrosity of machinery and gas leaks and fumes and methane –  it all is going to affect the quality of life of the folks in Union Hill, and it’s time for it to stop!”

A read statement by Chad Oba of Friends of Buckingham and an impacted community resident, said, “We are facing extreme health risks and yet in no part of this process has that been addressed. We did not ask for this. We do not want it. Our human rights are being ignored and our very existence as a neighborhood of African American people and low income people is being erased by Dominion and it’s interwoven friendly ally DEQ.”

Multiple instances where Governor Northam’s actions benefited the pipeline applicants while misaligning with his public statements were read through the loudspeaker, as well as a list of occurrences where David Paylor, another recipient of gifts from Dominion, had proven himself to have a cozy, corrupt relationship with Dominion and corporate interests.  This list included Paylor’s mishandling of the Mountain Valley pipeline and proof that Dominion’s influence over Paylor and Virginia’s regulatory processes has allowed other corporations, like EQT, to cause harm in Virginia as well.

Dominion’s history, rooted in colonialism and ties with the Virginia government, was also read with a conclusion that stated, “We are witnessing the last chapter of that history.  A few years from now, instead of talking about what brought about the creation of Dominion and its injustice, we’ll be able to talk about what brought about the end of Dominion and it’s injustice.”

For the last portion of the action, the group moved to where fundraiser attendees were exiting the parking deck, greeting guests with no-corruption chants and a thirty-foot “Stand With Union Hill” banner. As Governor Northam exited the deck, he was greeted with loud chanting, singing and a large blue banner stating “Democratic Donors – PROTECT Virginia’s Future, Choose leaders who ACT NOW to stop the pipelines, No ACP, No MVP.” 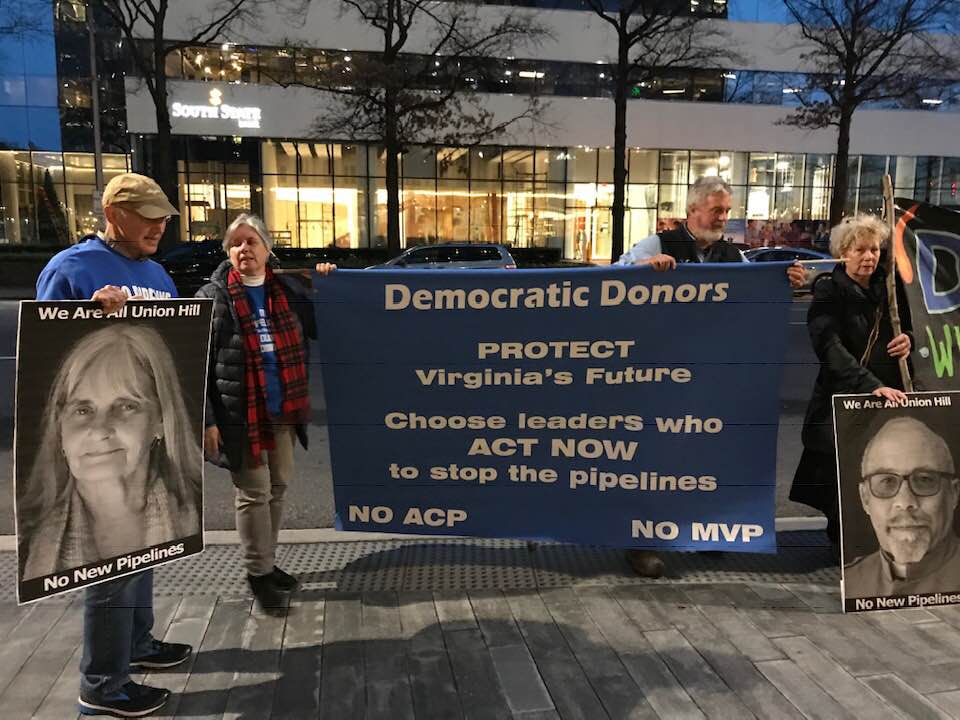 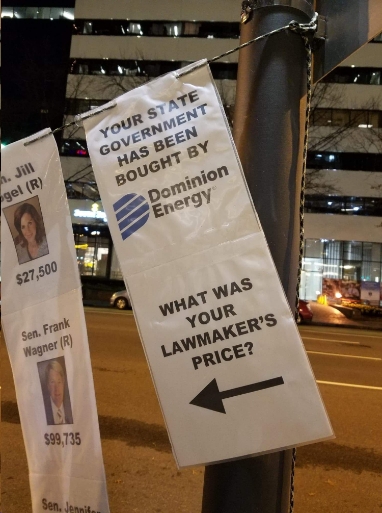 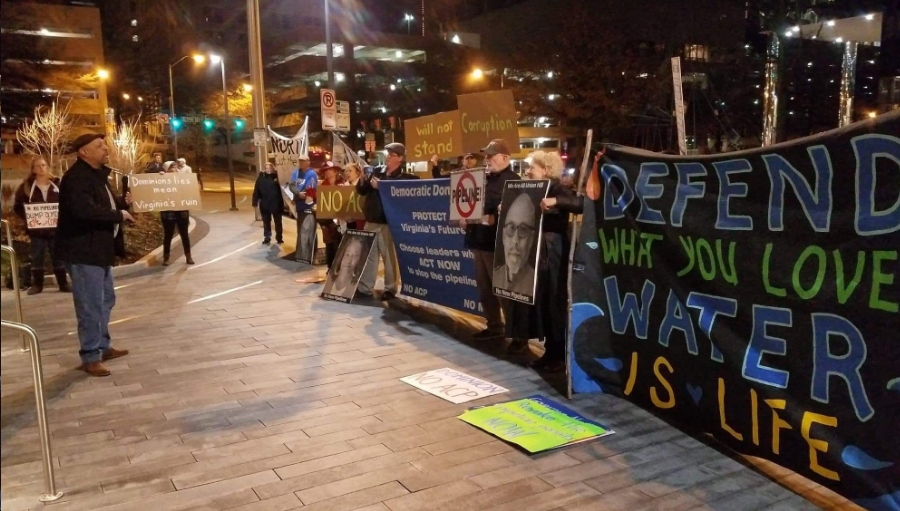 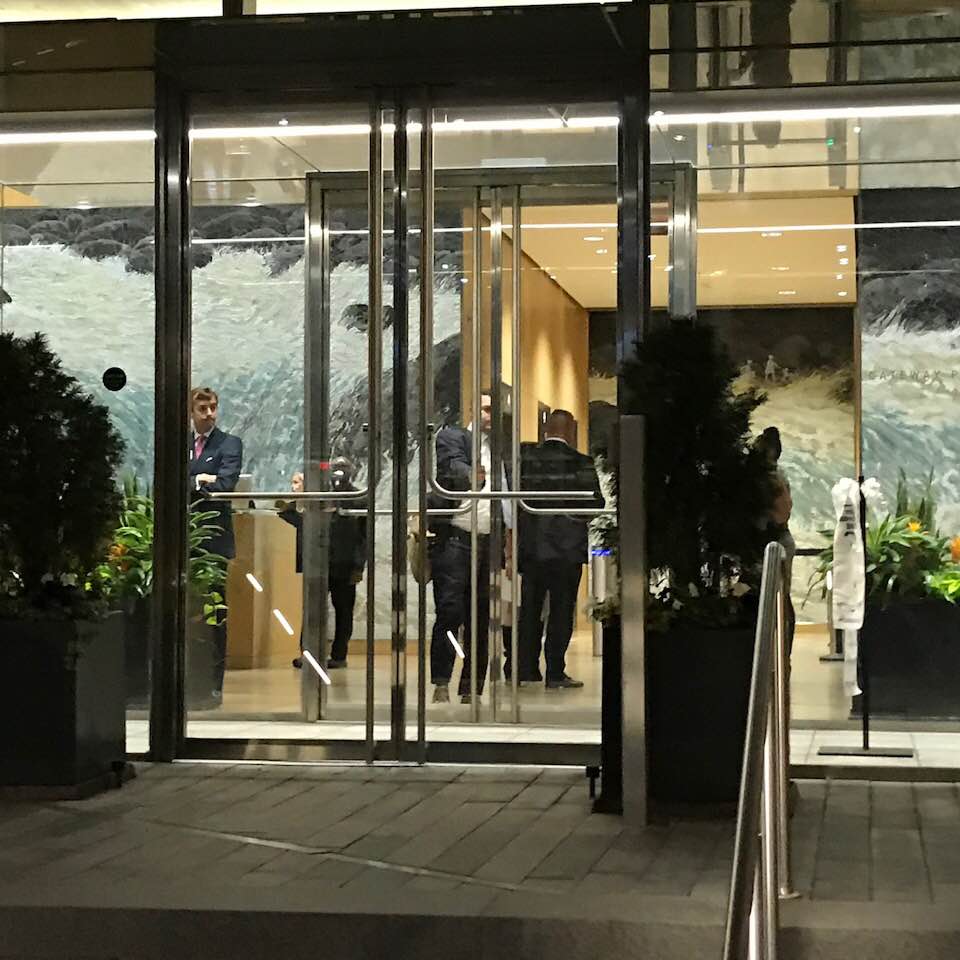