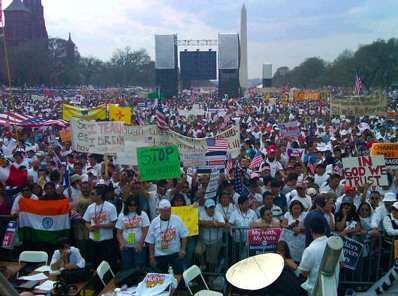 Not too bad, 200,000 people are reported at today’s “March for America” in support of comprehensive immigration reform. In comparison, the Washington, DC Fire Department estimated 60,000-70,000 people attended Glenn Beck’s “9/12” March last year.  In other words, it appears that 3 times as many people marched for comprehensive immigration reform today than for…well, whatever it was Glenn Beck told them to march for (actually, against) last year.

UPDATE: According to Change.org, “it’s just been reported that local Fox News is counting immigration reform supporters in the national mall at half a million!”