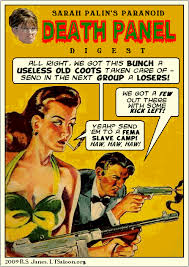 Over the past year, we’ve “debated” health care reform in this country. The reason I put “debate” in quotes is that much of what we’ve seen hasn’t been so much “debate” as it has been people shouting at each other, putting their hands over their ears and yelling “no,” and tossing out straw men and misinformation (aka, “lies”) as if they were going out of style.

Now, with (Democratic) health care reform legislation looking to be on the verge of passage, I was trying to decide if I’d heard anyone make any sensible (Republicans/right-wing) arguments in the past year against it. So far, I’m not doing too well on that score. For instance:

*”Death panels!” There aren’t any and never were any. This one is nothing more than tinfoil hat territory and paranoid ranting, not to mention an automatic disqualification of Sarah Palin for President for ever claiming such a thing.

*”Socialized medicine!” To the contrary, what this legislation actually does is expand the market for private insurance. What it doesn’t do is let everyone by into Medicare, create a single-payer system (which many on the left want to do), or even create a public option so that people aren’t forced to buy private health insurance from companies whose business model is “health care for profit.” That model, unfortunately, isn’t challenged by current health care reform legislation. If anything, it’s entrenched.

*”It will ruin the ‘best health care system in the world!'”  Actually, the United States ranks #41 in the world on infant mortality, #46 on life expectancy, 37th in overall performance and 72nd (out of 191) “by overall level of health.”  So much for that “argument.”

*”They’re ramming it through!” Hahahahaha. Sorry, but I just can’t help laughing at a claim that an issue that’s been debated for decades, including the intensive “debate” of the past year, is being “rammed through.” Also, the concept that a bill which has already passed the Senate with 60 votes (“filibuster proof” majority) and the House of Representatives is being “rammed” anywhere. More broadly, this is a case of “elections have consequences,” just as Bush’s tax cuts for rich people and war against Iraq were the consequences of electing him.  The only difference is that Bush didn’t run on invading Iraq, while Democrats clearly ran in 2008 on reforming health care. It’s called a “mandate,” and it’s also called “Democracy.”

*”It costs too much!” Of course, the fact is that the current “health care for profit” system costs too much, and also that rates are rising through the roof. Sorry, can’t blame this one on government; instead, it’s the wonders of the “free market,” combined with stupid policies that subsidize junk food and sedentary lifestyles that encourage obesity, that are doing this.  In reality, Democratic health care reform legislation  will reduce the deficit, but admittedly it won’t “bend the cost curve” sufficiently.  That’s one reason I support a public option, which of course has mainly been opposed by…wait for it…the same Republicans who say this “costs too much!” Nice, huh? The bottom line is that not doing anything about soaring health care expenditures in this country will bankrupt us.  This bill will help, although admittedly not enough. Still, it’s a start, which is far more than the “Party of No” has offered.

*”It’s unconstitutional for government to force people to buy health insurance!” We’ll let the courts fight this out, but for now I’ll defer to Stuart Taylor, who writes:

The answers are yes, yes, and that’s the point! according to most of the experts who have weighed in on whether the Supreme Court would uphold a mandate for individuals to buy comprehensive health insurance unless they’re already covered by employer-based plans. They cite the justices’ very broad reading since the New Deal of Congress’s powers to regulate interstate commerce and to tax and spend.

So much for that argument, in other words.

Anyway, those are just a few of the “arguments” against health care reform legislation I’ve heard over the past year. As far as I can determine, none of them hold any water. That, of course, hasn’t stopped the Eric Cantors and John Boehners (and Ken Kookinellis) of the world from making the “arguments.” Fortunately, we’re not “mandated” to listen to these guys.

P.S. There are arguments from the left against the current health care reform legislation, mainly that it doesn’t go far enough, that it entrenches the health-care-for-profit system, that it doesn’t enact “single payer,” that it doesn’t give people a “public option,” etc. I agree with most of these, but don’t believe they’re sufficient in the end to oppose passing the current bill.  What we need to do is do this, then improve it down the road, first and foremost by giving people a public option.