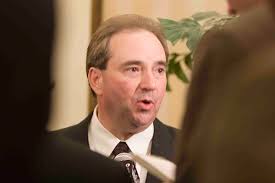 We all have had chuckles – plus a large dose of disgust – watching all the Republicans who railed against the American Recovery and Reinvestment Act and voted en masse against it, proceed to tout the benefits in their own districts. Now, Bob McDonnell’s hand-picked “jobs czar,” Lt. Gov. Bill Bolling, is joining their ranks.

Bolling spent last year attacking the federal “stimulus bill,”  saying that all the efforts to combat the Wall-Street-greed-driven Great Recession, were “massive federal spending bills that would result in the largest expansion of government in 40 years” and “will balloon the size of the federal government and increase the federal debt dramatically, and…do little to stimulate economic growth.”

“Jobs will be the first dividend from these innovative programs and projects, but they also have the potential to save tax dollars and reduce energy costs for Virginians for years to come,”  Bolling said.

I have just one comment: Welcome to the “GOP Hypocrisy Hall of Shame,” Mr. Bolling.

This year, the Democratic National Committee has kept a count of the hypocritical GOP office holders who accused the Obama Administration and the Democratic majority in Congress of horrible crimes because of the Recovery Act. So far, more than 100 governors, members of Congress and other office holders have made the “Hypocrisy Hall of Fame.” (I prefer calling it the Hypocrisy Hall of Shame.)

Bill Bolling joins Bob McDonnell, who revealed his hypocrisy earlier. McDonnell has praised a $24 million stimulus grant that allows Virginia to establish an Office of Health Information Technology. During the gubernatorial campaign McDonnell argued that the stimulus would be a bad policy for the country.

Perhaps the strangest hypocrite is Rep. Frank Wolf (R-10th). Wolf voted against the Recovery Act and then proceeded to criticize former Gov. Tim Kaine for not spending the stimulus money fast enough!

“We could use that money desperately. We’re in a critical situation. The economic growth and the opportunities here depend on improving transportation. There are a lot of things up here that that money could be used for,” Wolf told reporters in October. (I have a suggestion for Wolf. The next time you think your district has a “critical situation,” don’t vote against a remedy.)

Rep. Bob Goodlatte, unfortunately my congressman, also ranted and raved about how awful the Recovery Act was. He voted against it twice, then endorsed a project by NTELOS Holding Corp., which got a $16 million federal broadband stimulus award. Goodlatte even let the company give him credit because of letters he wrote in support.

I am quite pleased to see the Democratic Party of Virginia has begun to awaken from its post-November come. A DPV spokesman was quick to comment on Bill Bolling’s political hypocrisy.

“Apparently, being chief job creation officer means taking credit for jobs that other people have created. Bill Bolling should drop the double-talk and admit that the Recovery Act is creating jobs in Virginia. Just one year ago, Bolling said the Recovery Act ‘was not a stimulus plan at all.’ Virginians have to wonder, has he changed his mind? Or did he just think he could get away with hypocrisy?” said DPV spokesman Jared Leopold.

Evidently, Republicans think that they can get away with voting against every proposal of the Obama administration, while simultaneously reaping benefits. After all, the Hypocrisy Hall of Shame now has over 100 GOP members.