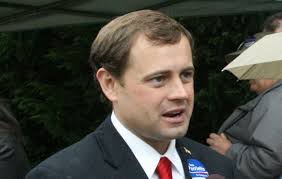 This is where the type of overheated, angry rhetoric we see from some – not all, of course – Tea Party activists can lead.

Law enforcement authorities are investigating the discovery of a cut propane gas line at the Virginia home of Rep. Tom Perriello’s (D-Va.) brother, whose address was targeted by tea party activists angry at the congressman’s vote for the health care bill.

An aide to the congressman confirmed to POLITICO that a line to a propane tank behind his brother’s home near Charlottesville had been sliced.

The FBI would not disclose the details of the incident, but said that they have been to the home.

As Politico also reported (on Monday), “Mike Troxel, an organizer for the Lynchburg Tea Party, posted on his blog what he thought was the congressman’s address, encouraging tea party activists to ‘drop by.'” Well, it looks like someone might have done just that. Wonderful.

P.S. If you want to support Tom Perriello, who has taken courageous votes for health care and climate action in the fact of the type of hostility reported above, please click here. Thanks.

UPDATE: Bradley Rees, who tends toward the Tea Party himself, weighs in and is not pleased.

IF (& I repeat, IF) an FBI investigation tracks this gas line incident to ANY conservative- I will do everything I can to see them jailed…Further- whoever did this, if it proves deliberate & not a bizarre accident (lawnmower, etc), should be jailed. It’s malicious either way.

Federal, state, and local officials are investigating what’s is believed to be an attempt on the life of Congressman Perriello. Coleman is now claiming to be shocked that this “collateral damage” has resulted. This is the same Coleman who planned to burn Perriello in effigy. Having spent a year and a half suggesting that Perriello should be assassinated, we’re now to believe that he’s shocked-shocked!-that anybody might actually give it a whirl.

Teabaggers are completely ineffective in the political realm. So now they’re left attempting to murder their own congressman. This isn’t a political movement. It’s an assassination conspiracy. It’s terrorism.

My number one priority right now is ensuring the safety of my brother’s family, and I am grateful to law enforcement for their excellent work. While it is too early to say anything definitive regarding political motivations behind this act, it’s never too early for political leaders to condemn threats of violence, particularly as threats to other Members of Congress and their children escalate. And so I ask every member of House and Senate leadership to state unequivocally tonight that it is never OK to harm or threaten elected officials and their families with anything more than political retribution. Here in America, we settle our political differences at the ballot box.