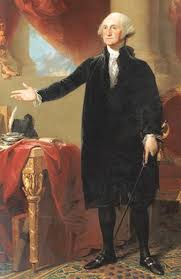 Ken Cuccinelli is arguing that a “mandate” by government for citizens to purchase health insurance is unconstitutional. Is it? Let’s ask George Washington.

The truth, however, is that the Second Militia Act of 1792, required a significant percentage of the U.S. civilian population to purchase a long list of military equipment:

[E]very citizen, so enrolled and notified, shall, within six months thereafter, provide himself with a good musket or firelock, a sufficient bayonet and belt, two spare flints, and a knapsack, a pouch, with a box therein, to contain not less than twenty four cartridges, suited to the bore of his musket or firelock, each cartridge to contain a proper quantity of powder and ball; or with a good rifle, knapsack, shot-pouch, and powder-horn, twenty balls suited to the bore of his rifle, and a quarter of a pound of powder; and shall appear so armed, accoutred and provided…

This Act became law only a few years after the Constitution was ratified, in President George Washington’s first term. Many of the Members of Congress who voted for the Act also were members of the Philadelphia Convention that wrote the Constitution. In other words, they probably knew a little bit more about the Constitution than Ken Cuccinelli.

Yes, they certainly did know more than our (not-so) esteemed Attorney General. But then again, so does anyone, their uncle, their pet hamster, their goldfish, etc. Ken Cuccinelli: lowering the collective IQ of Virginia government since 2002!