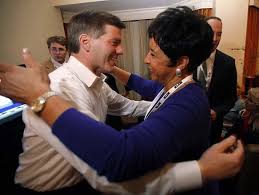 Don’t let anyone say you weren’t warned about this, Mrs. Johnson!

…after McDonnell was sworn in, she watched in horror as the new governor enunciated a variety of socially conservative policies, especially regarding a constitutional ban on gay marriage and other civil rights issues, and then declared a celebration of Virginia’s “Confederate History Month” without any mention of slavery.

“Politics, oh gosh!” Johnson says with a groan. “I feel like I was thrown under the bus on that one… The lesson that I’ve learned in all of this is I will never get involved in politics again.”

UPDATE: I almost forgot why Sheila Johnson was so impressed with Bob McDonnell – his supposed ability to “communicate.”  Obviously, McDonnell “communicated” something to Johnson, like…oh, a bunch of outright lies that she bought, hook line and sinker. Duhhhh.

UPDATE #2: More reason to be horrified at Bob McDonnell.

While some Virginia leaders are urging the federal government to slow down or even reconsider drilling offshore after a fatal accident off the Gulf coast, Gov. Bob McDonnell will fly to Houston Monday to speak at a conference promoting offshore oil and natural gas drilling.

McDonnell will speak about “Jobs and the Economy: How the Energy Industry is Creating Jobs, Leading the Economy and Impacting Consumers” at the 2010 Offshore Technology Conference

At the absolute minimum, this shows a tin ear for politics. This guy seriously has national ambitions?  Sorry, but he’s not even close to being ready for prime time.