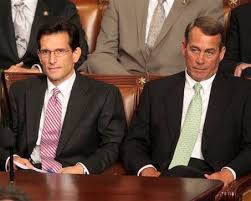 This would be a big mistake.

As the Republican whip in the House of Representatives, Rep. Eric Cantor, R-7th, has emerged as one of the leading critics of President Barack Obama and congressional Democrats.

But as he seeks re-election to a sixth term in Congress, Cantor may be unopposed by a Democrat.

I mean, obviously it would be extremely difficult for a Democrat to defeat the well-funded Cantor in the Republican-leaning 7th CD.  I also understand the argument that having a Democrat run against the House Minority Whip could actually help crank up Cantor’s fundraising.

Still, I believe it’s important that Democrats have a serious candidate against Cantor. The first reason is that, as a general principle, I believe Democrats should have someone making the case for our values (and against theirs) in as many districts as possible. Second, I believe that having a serious candidate against Cantor will put pressure on him to answer questions about his unproductive, negative “leadership” style, as well as to explain his votes against economic recovery and his constant talking down of the U.S. economy. Finally, a serious, well-funded Democratic candidate could force Cantor to spend his money close to home, instead of using it to help fellow Republicans.  This could make a difference in potentially close races, like Virginia’s 5th CD.

Democrats have until May 14 to come up with a candidate, and 7th CD Democratic chairwoman Abbi Easter “said the party is talking to several potential candidates.” Let’s hope that one of them throws his or her hat in the ring.