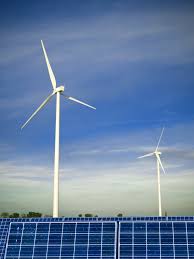 Over the past week, Sarah Palin encouraged Tea-Party candidates to make energy issues a central part of their campaigns. “There’s nothing stopping us from achieving energy independence that a good old national election can’t fix,” she said.

Palin’s full of surprises, but this piece of campaign advice caught me off-guard. After all, a recent poll found that energy is the issue that inspires the most faith in Democratic lawmakers. Since President Obama made clean energy a central part of their campaign in 2008, this poll suggests that this is what the majority of people want.  Therefore, Democrats AND Republicans should all be running on clean energy.

Tea-partiers are always more than welcome to pontificate & peddle” more of the same”, blathering about dirty, old energy technologies that date back to the 19th century.

When in fact it will be bold Republicans and smart Democrats that support clean, innovative, job generating “energy ideas” that will truly get a lift by campaigning on energy.

Eight years of “Drill, baby, Drill,” during the Bush administration got us exactly where we are now – in trouble and dependent on foreign oil. But that isn’t what the American voters want now. American voters want progress and they want jobs.  The clean energy plan at the center of the economic package, which just approved a $100 million investment in smart grid technology, will lead to 30,000 Americans getting new job training.

These are the energy policies that Americans will have the most faith in. And that’s why I encourage the undecided Senators out there–those lawmakers and candidates from both parties who have been quiet about clean energy and climate legislation–to step forward and declare their support for a clean energy future for America and show some leadership.

Rather than being scared about what the Tea Party will say in response, lawmakers should be listening to American voters. People want to see progress right now, not more Congressional gridlock.

Comprehensive clean energy and climate legislation is primed for passing. It has already passed in the House. A new Senate bill is expected to become public in the coming days and will have tri-partisan support in the Senate thanks to Senators Kerry (D), Graham (R), and Lieberman (I). After the bill is unveiled, negotiating will begin in earnest.  Forward movement is further propelled by the White House backing, thanks to President Obama’s repeated requests for a bill to be delivered to his desk. And it has already gone through numerous hearings and been thoroughly debated on the Hill.

Senators should pass a clean energy and climate bill this summer and head into the final campaign push with a real success in hand–an action plan to deliver on the three of the most pressing issues for American voters right now:

• Jobs: The clean energy and climate bill that passed the House last just is projected to create nearly 2 million jobs. In fact, for every $1 million invested in clean energy, we can create 3 to 4 times as many jobs as if we spent the same amount on fossil fuels.

• The Economy: There is a consensus among economists that America can prevent the worst impacts of climate change without hurting the economy. As Paul Krugman explained recently, the House bill would leave the American economy between 1.1 percent and 3.4 percent smaller in 2050 than it would be otherwise.

• National Security: This week, the U.S. Military warned that oil would be in dangerously short supply in the next few years, exacerbating political tensions and around the world. In contrast, Think Progress found that clean energy and climate legislation would reduce Iran’s petrodollar receipts by $1.8 trillion through 2050. That’s an average of $100 million per day that doesn’t fall into the hands of a regime that sponsors extremist groups around the world!

These are the kind of real numbers that Americans are looking for. That’s why those up for reelection this fall should run on a positive, forward-looking energy policy instead of the 19th century leftover rhetoric that Palin is dishing out.

Heather Taylor-Miesle is the director of the NRDC Action Fund. Become a fan on Facebook or Twitter.

"The @VASTATENAACP calls on the Virginia Senate to swiftly censure State Senator Amanda Chase. Not only was she in Washington, D.C. during the January 6, 2021 insurrection at the [U.S.] Capitol, but she supported and sympathized with the insurrectionists." https://bluevirginia.us/2021/01/sen-john-bell-senator-chase-is-clearly-not-sorry-for-supporting-the-insurrection-my-resolution-to-censure-senator-amanda-chase-will-be-going-forward-next-week#comment-5239063226