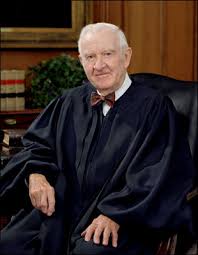 A bit earlier this morning, Supreme Court Justice John Paul Stevens announced that he will retirement, effective in June 2010. First off, I just want to say “thank you” to Justice Stevens for 35 years of service on the Court, plus of course his service to our country in World War II. As Adam B at Daily Kos points out, Stevens’ service began the day before Pearl Harbor, at the age of 21, when “he enlisted in the Navy and joined its intelligence service, earning a Bronze Star for his cryptography work which helped break the Japanese codes”). Now, at age 90 (in less than 2 weeks), I thank Justice Stevens and wish him a happy retirement!

With Stevens’ retirement, President Obama gets his second opportunity (after Sonia Sotamoyor) to replace a Supreme Court justice. A couple of points on that.

First this is more than enough reason for all of us to be happy that we elected Obama, not John McCain, in November 2008.  If McCain had won, he would have had the chance to tip the balance of the Supreme Court in a conservative direction for a generation or more to come, and that would have been a disaster.

Second, this is a chance for President Obama to appoint a strong advocate for progressive values – environmental protection, human rights, valuing people over corporations, promoting the “general welfare,” defending our freedoms and our responsibilities under the Constitution, etc.

Although appointed by Republican Gerald Ford, Stevens has generally been considered the most liberal justice on the Court. Now, President Obama has a chance to replace him with a young version of…John Paul Stevens! I urge President Obama to make an inspired choice that we can all be proud of for decades to come!

Kaine is 52, so certainly not too old to be nominated to the Supreme Court. He’s also very close with Barack Obama. I wonder if this is a serious possibility.