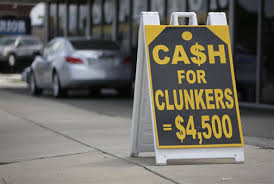 VA Gov. Bob McDonnell (R) has waded in to one competitive primary, but he’s staying out of the race against Rep. Tom Perriello (D-VA), shying away from a recruit top GOP strategists have pushed as a top candidate.

McDonnell yesterday endorsed car dealer Scott Rigell (R), one of 6 candidates running in a crowded field against Rep. Glenn Nye (R). But while chatting with reporters yesterday, McDonnell said he had no plans to get involved in the race against Perriello.

In that contest, state Sen. Robert Hurt (R) is the party establishment’s favored candidate. But some of the 6 other GOP candidates have been tagging Hurt as the party of DC, making top GOPers reluctant to wade into the race. McDonnell is among that group.

This story is amusing for two main reasons.

First, USA Today reports that Rigell, who has criticized “reckless bailouts” yet “sold 138 cars under Cash for Clunkers last year, is being attacked by fellow Republican 2nd CD candidate Ben Loyola for “hypocrisy.” Now, Bob McDonnell has endorsed the “Cash for Clunkers” guy, apparently putting him in the “reckless bailouts” hypocrisy camp as well.

Second, we have McDonnell specifically dissing Robert Hurt, despite the fact that they “worked very closely together in the General Assembly.” I particularly love McDonnell’s lame excuse that Rigell is a “special case” because of a “20-year relationship” and that this race “is the only one that I’m involved with.”  We’ll see if McDonnell holds to that over in coming months and years, or if he finds other “relationships” that merit his involvement. We’ll be watching…