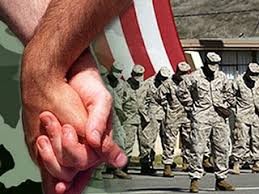 I’m not at all surprised by the position that Sen. Jim Webb appears to be taking on the compromise presently being sought in Congress for the military’s “Don’t Ask, Don’t Tell” policy regarding gays serving.

Sen. Webb told reporters that he was leaning against voting for the compromise, which would immediately end DADT legally but would allow the military to take the time it deems necessary to implement the new policy.

When he was asked if he would vote “no” when the Senate Armed Services Committee takes a vote on the proposed legislation, Webb refused to say. The way things are shaping up, Webb’s opposition won’t stop the legislation…that is, if Sen. Nelson of Florida joins Sen. Ben Nelson of Nebraska in voting “aye.”

Why am I not surprised about Sen. Webb’s position on the matter?

Well, anyone who has talked with Jim Webb for any length of time knows that he is, first and foremost, a man who respects the military chain of command. After all, he served in the Marines, including combat during the Vietnam War, receiving a Silver Star, the Navy Cross, and two Purple Hearts. Plus, he served as secretary of the navy during the Reagan administration. He came from a military family himself and graduated from the Naval Academy. He’s military…through and through.

What would have surprised me more would have been if Jim Webb had agreed to the proposed DADT compromise after hearing that the Commander in Chief, the chairman of the Joint Chiefs of Staff, and the Secretary of Defense preferred to follow the original plan of study before any change was made.

For a man raised by a career military father who also made the military an integral part of his own life, the decision Jim Webb reached is no surprise to me.

(I also remember on several occasions meeting Jim Webb’s driver during the campaign that resulted in his election to the U.S. Senate, a man who had served in Webb’s unit in Vietnam. Mac left his job in Tennessee and came to “enlist” in the Webb campaign for the duration. That sort of comradeship and loyalty is what the military receives back from Sen. Webb, as well. So…I am not at all surprised by his views on the proposed policy change.)