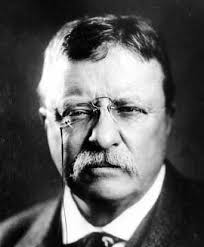 I don’t agree with Bearing Drift’s J.R. Hoeft on much, but I certainly have asked myself this question for years now” “Where are the environmental Republicans?”

… politically, what’s perhaps the most disturbing issue is the lack of comment from Republican leaders. Whether it be John Boehner, Eric Cantor or Bob McDonnell, the lack of seizing initiative on this issue from conservatives has been appalling.

Whether it be biofuels, solar, wave energy, wind power, nuclear, or other – why has no Republican seized the opportunity to talk about the “all of the above” solution? Why have they not spoken about how dreadful this spill is and how it is yet another example, in a long string of examples, of how oil is a commodity that we eventually have to ween ourselves off of? Why have they not promoted and presented alternatives?

2. Ideologically, today’s “conservative” movement is a far cry from what “conservative” used to mean, back when the Teddy Roosevelts of the world – or even the Dwight Eisenhowers, Richard Nixons and Gerald Fords of the world – were in charge.  It seems to me that, just as the root of “progressive” is “progress,” the root of “conservative” should be “conserve,” and that included “conserving” natural resources. In addition, you’d think that a movement with so many religious people would believe in “creation care.”  Unfortunately, today’s conservative movement seems to have ditched the “conserve” part from its vocabulary, and instead chosen to worship on Grover Norquist’s altar of the “free market.” Of course, it’s not even really a “free market,” as there are distortions – tax breaks, subsidies, lax regulations, failure to price in “externalities” – which wildly tip the playing field away from energy efficiency/clean energy and towards dirty fossil fuels.

3. Today’s conservative movement actually has people in it who aren’t just pro-business, but are actively anti-environment (bizarre, I know; how can anyone actually be ANTI-environment? WTF?). These people are the ones claiming that those of us who want to protect our planet – the only one we’ve got, last I checked! – from devastation and degradation are “radicals” and “extremists.” The fact is, the people who want to trash our planet – or at the minimum, who don’t care if we damage our environment, all in the pursuit of profits, cheap energy (however dirty or dangerous), and their (bizarre) version of the “American Way” – are the “extremists.” Because, I put it to you, it’s “extreme” (and completely crazy) to believe in destroying our only home.

The question is, do the J.R. Hoefts of the world have any influence in the Republican Party of John Boehner, Eric Cantor, Mitch McConnell, Rand Paul, Don “This is not an environmental disaste” Young, and their ilk?  Unfortunately,  as far as I can tell, the answer to that question is a resounding “NO!” Which is one of the many reasons – along with the Jerry Falwell fundamentalist influx – why I decided to leave the Republican Party back in the early 1980s. What I don’t understand is how anyone who is pro-environment can remain in a party which, by the very nature of its ideology and by the very makeup of its main contributors, is inherently, even extremely, anti-environment. I’m not saying these people will or should become Democrats, but how about a new, Teddy Roosevelt-style Republican Party that ditches the pro-“robber baron” mentality and puts the “conserve” back in “conservatism?”  Along those lines, the big question is, who – if anyone – is going to be today’s Teddy Roosevelt?

P.S. Just to emphasize, protecting the environment should never be a “liberal” or “conservative” issue. Whether you are a hunter, angler, or other outdoorsperson who wants to protect the habitat you enjoy; a religious person who believes that protecting “god’s creation” is a sacred duty; an enlightened businessperson who knows that environmental responsibility and energy efficiency are completely consistent with making good profits; someone who simply loves nature and wants to protect it; a national security “hawk” who wants to keep money out of the hands of Ahmedinejad and Al Qaeda; and/or a pragmatist who knows that an unhealthy environment means unhealthy humans as well; you should want to slash our dependence on oil and other dirty, fossil fuels, while preserving the environment for generations to come. Again, how is any of that “liberal” or “conservative?”  Answer: it isn’t.