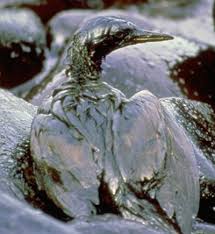 It’s now Day #52 of the Gulf of Mexico Oil Disaster, and we’ve learned a great deal. First and foremost, we’ve learned that all those oil industry apologists, including several who used to post comments here, were absolutely, completely, and horribly wrong when they claimed that offshore oil drilling was “safe.” Most of us here at Blue Virginia always knew that this argument was an outright lie, or at best “truthy,” but now it’s deader than the Gulf of Mexico’s fishing industry that BP’s arrogance and irresponsibility has killed. 🙁

Second, we’ve learned that gutting the government, slashing oversight and regulation, and letting the industry – in this case, Big Oil – run amok, is a catastrophe waiting to happen.  For more on this topic, see this article in today’s Washington Post. In short, the horrors we’re experiencing right now in the Gulf of Mexico – pelicans covered in oil, turtles floating dead in pools of black goo, an entire way of life threatened, billions of dollars in tourism revenue down the tubes, etc. – is the inevitable result of  Club for Growth-style “conservative” “thinking.”  Never let anyone fool you again or claim to represent a “compassionate” strain of this nihilistic ideology.  If they try to tell you that, just remind them what happened to the Gulf of Mexico after years of their “let industry get away with murder” policies.

Finally, we’ve learned what many of us already knew, that Sarah Palin’s crazed chants of “drill, baby, drill” were as mindless and toxic as everything else that comes out of her mouth (or read off her hand).  Check out these poll results, which finds that just 25% of Americans now support increased drilling in U.S. coastal waters, compared to 31% who say it should be decreased and 41% who say it should be kept the same. In contrast, 87% of Americans say we should develop more solar and wind power (correct answer!).  In addition, majorities of Americans blame “weak federal regulations on offshore oil drilling,” as well as “Inadequate enforcement of existing regulations” and “Unnecessary risks taken by BP and its drilling partners” for this debacle. Once again, correct answers!

In sum, after 52 days (and counting) of horror in the Gulf of Mexico — all courtesy of the worldview espoused by people like Sarah Palin and Ken Kook-inelli — any politician who continues to align himself or herself with Palin should be automatically disqualified from serious consideration for public office.  That includes Palin endorsees Carly Fiorina in California, Rand Paul in Kentucky, and Nikki Haley in South Carolina, none of whom should be allowed anywhere close to the seats of power. Unless, that is, you like seeing pictures of dead, oil-soaked dolphins and pelicans, and people whose way of life has been utterly devastated.