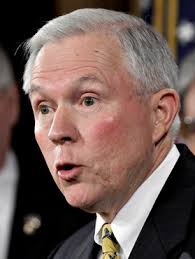 Wonder why Jefferson Beauregard Sessions III has been such a @#&!! in the Kagan hearings?  Me too.  And he is the main reason I can hardly wait for the confirmation to be a done deal.  And it will.  Largely because of him (and to a lesser extent, John Cornyn and Lindsay Graham), the hearings have been too painful to watch for very long.

It is clear that until the end of time, GOPhers will punish Dems for the borking of Bork, who deserved such borking, much the same way Sessions would were he to have been considered for a judgeship.  But, wait!  He was.  And therein is probably the rub.

This might offer a clue.  For those who’d rather cut to the chase, he was denied confirmation to a federal district court seat during the Reagan administration because even the ABA opposed him as unqualified.  All that follows springs from that.  Most likely they understood there that Sessions has the brain of a flea. Last year he falsely accused Sonia Sotomayor of racism in this video clip.  It’s worth a look.  Here’s another video about Sessions.  It also illustrates another unexpected consequence of Arlen Specter’s becoming a Dem.

Jefferson Beauregard Sessions never asks John Roberts or Antonin Scalia whether they can put ideology aside.  Indeed, they were selected by Republicans precisely because they had an ideological bent.  Now Sessions thinks that only radical conservatives can be ideological, progressives, not so much.

One of the most conservative members of Congress, Sessions can be counted on to make one unhinged comment after another. He’s questioned Kagan’s honesty, accused her of “punishing the military” (which BTW is patently false because she actually found a compromise to enable them to recruit at Harvard Law), and of sidestepping the will of Congress. As in the Sotomayor hearings, Sessions stooped to new lows, spotlighted his own vicious racism and sexism and showed himself as the @#%! he is. This is the best that his compatriots can do (to send him to the Senate)?