See ArlNow for more about how “[t]he man suspected in the stabbing deaths of at five people was arrested and later released in Arlington last week.” The Washington Post, which originally broke the story, adds that the suspect, Elias Abuelazam, “has long ties to Leesburg and Northern Virginia.”

Online property and court records indicate Abuelazam was in the Washington area at least between 1998 and 2007. He owned a house in Leesburg between 2002 and 2007 and has several motor vehicle violations in that time, the records show. Relatives said he was born in Israel and emigrated to the U.S. in the 1990s. He was in the country legally and had a green card, officials said.

In addition, the Post reports, Abuelazam – an Israeli Arab from Ramle – reportedly “worked at the Piedmont Behavioral Health Center, now called Northridge Behaviorial Healthcare, in Leesburg in the mid-2000s.”

P.S. Any predictions on how long it will take for the right wingnutosphere to go…well, wingnutty over the fact that this guy’s an A-R-A-B? Of course, he’s a Christian Arab so their heads are likely to explode from cognitive dissonance, but whatever. 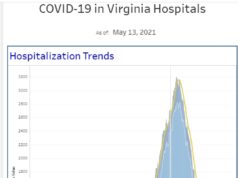