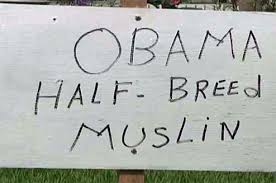 This morning, while wrestling with my malware-infested computer, I was considering what to write about the latest insanity, that increasing numbers of Americans (mostly Republicans and conservative-leaning independents) “say Obama is a Muslim.” Other than despair, disbelief, and dismay, plus a healthy dose of anger at the right-wing lie machine (Faux “News,” Rush, Beck, Palin, etc.) for demonizing President Obama 24/7, I wasn’t feeling particularly inspired. Fortunately, a smart, libertarian blogger came to the rescue, with a superb blog post on this topic.  I strongly recommend that you read the whole thing, but a few lines that jumped out at me were:

*”At this point, more than two years after the story first became public, no amount of evidence or argument is going to convince that remaining 27% that their belief about the President is wrong.”

*”It is, quite honestly, easy to believe dark and conspiratorial things about a group of people when you don’t know anyone who belongs to that group and when Fox News Channel is telling you that they’re coming to destroy your country and your way of life.”

*”…those who continue to spread the Obama is a Muslim lie do so on the assumption, if not the hope, that people will excerise religious prejudice toward Obama because they think he’s a Muslim.”

*”By spreading the Obama-is-a-Muslim lie, people are saying  that a person’s religion should disqualify them per se from public office.

Quite honestly, I can’t think of anything more un-American.”

Perhaps most troubling about all this isn’t even the politics of the day, it’s what this says about the “Growing Ignorance” of the American public: “Technology can archive, retrieve, manipulate and communicate more information, faster than ever before in human history, but the public seems to be losing their collective common sense for nonsense. It’s a paradox of the Information Age.”  Thus, we have many of the same people who don’t “believe” Barack Obama’s a Christian also not “believing” in climate science, evolution, etc. Can someone please explain to me exactly how we are going to compete with China, India, et al. in the 21st century world economy if we are a nation of ignoramuses and xenophobes?