By now every political junkie is well aware that Robert Gibbs, White House press secretary, expressed “frustration” in no uncertain terms with the so-called left wing of the President’s own political party:

“I hear these people saying he’s like George Bush. Those people ought to be drug tested….. The professional left will be satisfied when we have Canadian health care and we’ve eliminated the Pentagon. That’s not reality….They wouldn’t be satisfied if Dennis Kucinich was president”

One reporter who heard many of these remarks was Sam Youngman of The Hill newspaper, as Linda Feldmann reports in The Vote blog, and her take was that “the press secretary dismissed the ‘professional left’ in terms very similar to those used by their opponents on the ideological right.”

It seems that the professional press corps agrees across the board, that, no matter how hard Robert Gibbs tried to “walk back” what he said, he spoke honestly the first time, as evidenced in Ruth Marcus’ opinion in Real Clear Politics,when she scathingly asked “Excuse me, but can these people not count to 60? Have they somehow failed to notice that Mitch McConnell and John Boehner have not exactly been playing nice?”; and Chip Read, writing in cbs.news concluded that “having Gibbs fire a calculated shot across the bow- in part to show moderate and independent voters that the president is no crazy liberal- might just make good political sense.”

In other words, the Permanent Party of Inside the Beltway and their dancing pundits all piled on, chastising those pesky left-wingers for being so, so…. lefty—- out of touch, simply wild-eyed, not main stream, etc. I expect the pejorative, “professional left” has entered the permanent vocabulary of the Washington commentators, and will be used against progressives forevermore.  What we have here is another example of how the relentless pressure from the right wing has marginalized what used to be the center of American political thought, turning it into “crazy liberal,” and moving the political spectrum once again more to the right, aided by almost every opinion-maker currently part of public discourse. Indeed, if anybody should be considered frustrated, maybe it would be the “professional left.”

But wait, there is another opinion, and it says that all this tut-tutting from the pundits is actually a swan song, the desperate last gasp of the “elites” of the Democratic Party, those pompous Inside the Beltway Permanent Party types complaining about the grassroots left of their own party.  David Sirota in an Op-Ed on TruthOut on Saturday points out that the results of three recent primaries has given the Democratic Establishment cause for alarm. While the Establishment’s Senatorial candidates all did win their primaries—- in Colorado, Arkansas, and Pennsylvania—-  it was a close call, and it took massive amounts of money plus “full-throated endorsements” by President Obama to defeat poorly funded grassroots progressive challengers.  Example: 46 percent of Democratic voters in Colorado cast their ballots for the progressive Romanoff, that is, against Michael Bennet, the candidate of President Obama and the Establishment, who spent more than any other primary candidate in Colorado’s history, almost $6 million on his campaign (compared to $2 million for Romanoff).

The relatively close call in Colorado is a hopeful sign, especially when compared with similar results of

“White House-thwarting Democratic primary challengers in Pennsylvania and Arkansas. And that trend explains the increasingly fierce pushback from Washington…and why DNC powerbrokers moved so forcefully against Romanoff. He was the latest candidate to represent what those elites know to be an ascendant national progressive uprising inside the Democratic Party (my emphasis)—- one that keenly understands money’s corrosive effects on public policy and that, therefore, rejects the Beltway’s corporatist model.”

What Sirota regards as an “uprising” by the progressive grassroots is such a real threat to the Establishment that it had to use not only the DNC and President Obama himself, but Obama’s campaign infrastructure Organizing for America to defeat Romanoff in Colorado.  He says that such a desperate effort is a sign that the days of the Establishment Elite of the Democratic Party are numbered.

Another sign of grassroots rebellion was highlighted by Richard Amster in another Op-Ed in Truth-Out on 15 August, describing a massive, non-violent blockade on 29 July by residents on foot of the streets of their town, Guadalupe, AZ, against enforcement of Arizona’s draconian anti-immigrant law. SB1070. “Civil disobedients created a wall of noncompliance at the edge of their town,” just outside of Phoenix, and it completely flummoxed law enforcement officials. Having made their point, that they, like Gandhi and Martin Luther King, would not “cooperate with the evil” of enforcing SB1070, the citizens quietly dispersed.

There is a growing anger, a growing determination in the progressive grassroots of the Democratic Party, and it scares the spit out of the old-line Establishment. The Republican conservative-libertarian grassroots has already presented their party with their own anger in the Tea Party. As it happens, the Republican grassroots rebellion has, so far as outsiders can tell, been successfully co-opted by the Republican topmost elite and moneybags, in a sort of “if you can’t lick ’em, join ’em” phenomenon. Their elites appear to have been successful in turning their grassroots rebellion to their advantage.

Will the Democratic elite do likewise? I doubt it, because it would require that barnacle-encrusted bunch to bestir themselves to make some changes within their tight little club, and we have seen how they re-acted in Colorado, Pennsylvania, Arkansas, and even Louisiana—- not to mention Mr. Gibbs’ little tantrum about that rascally, unrealistic “professional left.” Therefore, if we are to believe even part of what David Sirota suggests, it behooves the angry progressive base to do more of what they did in Colorado, Pennsylvania, Arkansas, and Louisiana. Challenge the Establishment, hold their feet to the fire, and beat their socks off…. and become the new Establishment with a new DNC. 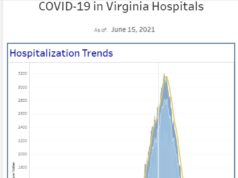 Remember, Glenn Youngkin said he thinks it was a "sad thing" (!) that Medicaid was expanded in Virginia. Do NOT let this guy anywhere near the Virginia governor's mansion... https://bluevirginia.us/2021/06/tuesday-news-while-gop-obstructs-action-climate-crisis-in-western-us-is-worst-in-1200-years-as-mcconnell-effectively-dares-senate-dems-will-they-respond-critical-race-theory-invades-s#comment-5420546732

Not sure what to make of this exactly... https://bluevirginia.us/2021/06/tuesday-news-while-gop-obstructs-action-climate-crisis-in-western-us-is-worst-in-1200-years-as-mcconnell-effectively-dares-senate-dems-will-they-respond-critical-race-theory-invades-s#comment-5420495967