(Thanks to Jeff Barnett for this. Obviously, just on this issue alone, Barnett would make an infinitely superior Congressman than Frank Wolf, a right wingnut masquerading as a “mdderate” (he’s not!) who votes in lockstep with Eric Cantor and John Boehner. – promoted by lowkell) 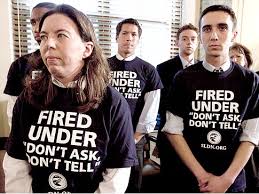 In a free state, one that prides itself on openness and tolerance, it is unconscionable that we would prevent some Americans from serving their country because of who they are.

Yet, that is the prejudice behind the “Don’t Ask Don’t Tell” Policy that prevents openly gay men and women from serving in the armed forces.

Lowell has a good post on this matter already today, so I won’t belabor the point, but I think it’s important to add my voice to the large and growing number of people calling for DADT’s repeal (even a Wall Street Journal Columnist is joining the chorus.)

I was in the United States Air Force for 26 years. I knew gay men and women who served honorably. I saw how DADT limited our ability to recruit dedicated soldiers, sailors, and airmen. My decades in the military lead me to this conclusion: The discrimination required by “Don’t Ask Don’t Tell” is not justified by any military necessity. It is time for this policy to end.

The idea that honesty and forthrightness somehow impede combat readiness is preposterous, and it doesn’t mesh with anything I saw in my nearly three decades of military experience. The inevitable consequence of a forcibly constrained identity is simmering resentment and tension hidden below the surface. That is NOT the way to maintain unit cohesion, despite the protestations of DADT advocates. In order to have effective and responsive leadership, in order to have properly functioning lines of communication, commanders and their men need an honest relationship. You cannot build trust on a foundation of deception.

The time has come to repeal DADT. The House did its job in May. Frank Wolf, needless to say, voted against allowing gay people to serve openly in the military. Today, the Senate has a chance to finish what the House started.

Today at 2:15, there will be a crucial procedural vote on whether to move ahead to debate of the Defense Reauthorization Bill, which includes a provision that allows the Pentagon to lift DADT.

Call your Virginia Senators to make sure that they vote to end the Republican filibuster.

We have just about an hour and a half to make sure that we move in the right direction on this one. Let’s all pitch in.