The Old Redneck heard yesterday that the Rob Wittman campaign mailed (or phoned ?) a push poll throughout VA-01 on which one of the questions about Democratic candidate Krystal Ball was something like:  “Did you know that Krystal Ball has an unusual affinity for homosexuals and lesbians?”

Supposedly the sponsor of the poll was anonymous.

Anyone seen or heard the details??

By the way — the Old Redneck has heard Krystal speak twice in the last month.  Krystal is impressive — she’s thoughtful and sincere and she understands the issues; she talks with people, doesn’t dodge tough questions.

I was a solid Scott Robinson supporter and still think Krystal has little chance of unseating Wittman.

However — there are as many Democrats and Independents-leaning-Democrat in VA-01 as there are Republicans and leaning-Republicans.  Maybe if we work the phones and ring doorbells we can knock off Do-Nothing Rob. 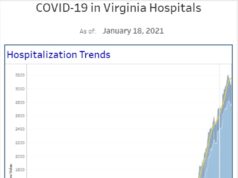 Virginia Republicans “Quote Dr. King on social media one day out of the year” while “liv[ing] a life that runs counter to his words...

Kinda weird for @kirkcoxforva to sponsor this rally, then tweet that they should go home? https://bluevirginia.us/2021/01/2021-va-gop-gubernatorial-candidate-kirk-cox-these-people-arent-protesters-theyre-provocateurs#comment-5232322083

Just 5 yrs ago, Dick Saslaw - who voted this morning to repeal VA's death penalty - said "You kill 7 people, you’ve given up the title of human being and you deserve whatever you get. Let me repeat that: you deserve whatever you get." https://bluevirginia.us/2021/01/monday-news-martin-luther-king-gave-his-life-fighting-the-same-forces-stirred-by-trump-bidens-term-nears-as-trumps-dissolves-in-disgrace-and-disarray-why-joe-biden-is-going-ahead-with#comment-5232302111