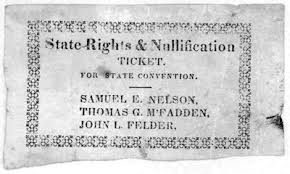 Yesterday, at the Virginia Tea Party convention, Gov. Bob McDonnell announced his support for an amendment to the U.S. Constitution that would provide for a form of nullification. This almost seems unreal and unbelievable, but unfortunately it’s true.  Here’s State Sen. Donald McEachin, quoted in the Richmond Times-Dispatch, on McDonnell’s latest lunacy:

Sen. A. Donald McEachin, D-Henrico, called McDonnell’s commitment to the measure “shortsighted” and said, “I really think of it as an attempt on his part to play to his base.”

“There are times when only the federal government will stand up for the rights of minorities,” McEachin added, “and for the governor to support what is essentially the nullification of a federal act is poor government and poor governing.”

Theories of nullification were often floated during the first several decades of the United States, by individual states having disputes with the federal government over issues ranging from slavery to tariffs. However, federal supremacy was finally established by the Civil War and the Northern victory over the South’s attempted secession. Nullification was later invoked by Southern segregationists during the Civil Rights movement, and was consistently rejected in federal courts.

Recently, though, nullification has made a bit of a comeback among some elements of the Tea Party movement, and has even reached all the way to Minnesota, where presumptive Republican gubernatorial nominee Tom Emmer is a staunch proponent of it.

So much for Bob McDonnell understanding what the Civil War was all about.