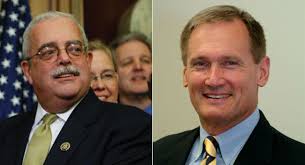 The rest of their endorsements for Congress in Northern Virginia are a mish-mash of shoddy/lazy thinking, corporate hacktitude, and general incoherence (although I agree with them on Jim Moran, to write off Patrick Murray with one word, “lackluster,” doesn’t in the least bit get out how wacko this guy is). However, the Post this morning does manage to display a shining clarity when it came to 11th CD Republican nominee Keith Fimian.

Unlike Mr. Davis and Mr. Connolly, who cut their teeth as nuts-and-bolts problem-solvers in the unglamorous arena of local government, Mr. Fimian is an ideologue with sparse experience of local issues who has embraced much of the Tea Party’s dogma. Mr. Fimian would slash or eliminate most of the revenue streams that sustain government and the federal workforce while somehow leaving spending on the military and big-ticket social programs mostly untouched.

His magical budgetary math would explode the nation’s already massive deficits and debt, a fact that the affable Mr. Fimian does not acknowledge. Instead, he offers the wan assurance that as a small businessman — he runs a home inspection company — he knows how to create jobs and set the economy on its feet. If elected, Mr. Fimian would join the querulous ranks of representatives in Congress who offer plenty of views on the nation’s challenges but no workable solutions.

Yes, that about sums it up on Fimian – smoke and mirrors, absurd attacks, over-the-top rhetoric, extremist views, and a complete lack of solutions for challenges confronting the 11th CD or the nation.  Even if you don’t like Gerry Connolly, the choice in the 11th CD is a “no brainer”, just like the choice in the 5th CD. In both cases, Republicans haven’t offered even semi-serious candidates, so even if you don’t like the Democratic candidates, you shouldn’t vote Republican (maybe write in “Mickey Mouse?”).

Finally, a though on the 10th CD race, and the Post’s predictable, but also inexcusably lame, endorsement of Frank Wolf – their favorite “moderate” Republican who is about as “moderate” as John Boehner and Eric Cantor, with whom he agrees almost all the time. This endorsement is the epitome of the Post’s corporate hacktitude, combined with completely muddled thinking. Thus, Wolf has “resorted to uncharacteristic fear-mongering regarding the fate of detainees in Guantanamo Bay” and “pushed a federal commission to eliminate the deficit but without committing himself to the tax increases that are half the solution,” yet he’s worthy of reelection, simply because he’s an incumbent who fits into the Post’s “moderate Republican” (even though he hasn’t fit that description for years) check-box.

As for Jeff Barnett, the Post casually dismisses him with one word, “lackluster.”  The fact that Barnett has walked the district, attended debates – skipped by the (non-lackluster?) Frank Wolf – is apparently not relevant to the Post. What is relevant to a corporate monstrosity like this? Money, money, money. Or, in Barnett’s case, the lack thereof.

In other words, when the Post says “lackluster,” it simply means “lacking a lot of money.” Which, apparently, is all the corporate, for-profit Post cares about. Just keep that in mind when reading anything they write. And, once and for all, can we ditch this ridiculous “liberal media” meme?