The concerns of nearby residents are one of many things that need to be considered when deciding where to put a wind farm. But fears in Virginia's Tazewell County seem to be getting a little … well, exaggerated. Here's a recent column from the local paper:

While Christmas stories fill the season with hope and love, there is always a story about the Grinch who stole Christmas. With Dominion Resources recent announcement that it is acquiring 100 percent ownership of a 2,600-acre tract of land on East River Mountain for the purpose of developing the proposed Bluestone River Wind Farm, the Grinch is back — at least in the opinion of area people who oppose the windmills for many reasons.

Yeah, you remember the Grinch? And that Dr. Seuss story about how he tried to build a $200 million project in Whoville that would deliver $10 million in local tax revenue & $10 million in related development? THE NERVE.

"Many reasons" looks more like reason being supplanted by the fear of something new. Residents say they worry about property value, but even the National Association of Realtors says wind farm impact on property values is minimal (if existent at all). Residents express concern about unsightliness, but take a look at how the windmills would look in these Dominion projections: I mean, really? Seeing these pictures, I could only be reminded of the melodramatic OH MY GOD of South Park's Randy Marsh. That's what you're protesting? The dots on the ridgeline?

It always strikes me as weird that people in places like Tazewell County suddenly act all protective of their land when all I had to do was a Google Map search of "Tazewell County, VA" to quickly find sites like this: 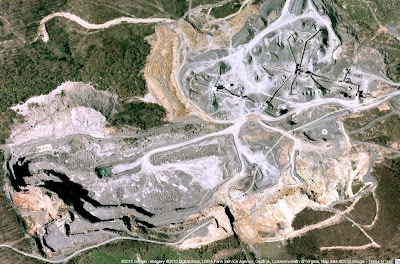 Massive open-pit mines? No problem! Windmills off in the distance? Christmas ruined. How does that work?

And in the big picture, for every windmill we don't build, we need to rely on that much more coal power, which annually kills thousands of people via air pollution & dozens more in mine disasters.

But it's hard to feel much sympathy for electric utilities in this case. They've stood by & watched for years as Republicans & Rush Limbaugh have trashed renewable energy as a socialist plot to leave your children shivering in the dark, because in the short term they were doing just fine making money off of coal power. I wonder if they regret it now.