When someone got shutout on our college foosball table, we’d tell them they got skunked. Well, tonight the Arlington Young Democrats got skunked by Arlington’s Democratic elected officials. 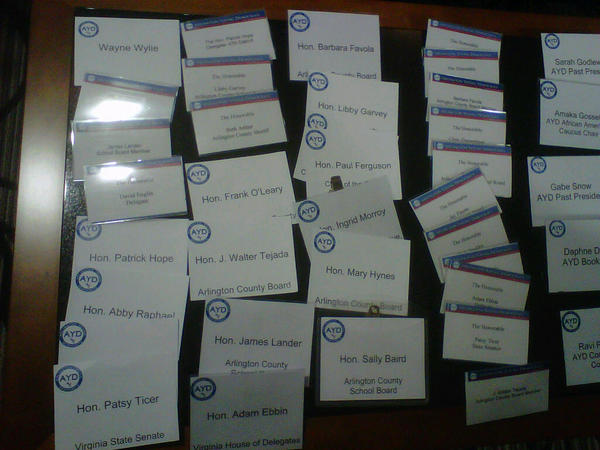 I asked several AYD officials why there wasn’t a single Democratic official (including zero ACDC representatives) in attendance. Did invitations not go out? Were they told not to attend? No, they told me – every one of Arlington’s Democratic leaders said they had a conflict. Yet not one AYD leader would say a bad word to me about any of those people & offered hope that those officials would attend the upcoming AYD holiday party.

As I walked out, I took this cell pic of all the Arlington Democratic elected official name tags still sitting untouched on the check-in table. How many of those same elected officials will be demanding AYD’s full & unconditional support for their own campaigns next November?

Former Arlington County Democratic Committee Chair Peter Rousselot & former Lt. Gov. candidate Mike Signer were both there to show their support for Arlington Young Democrats. Tonight I had to wonder why the no-shows are Arlington’s elected officials – and people like Peter & Mike aren’t.