I had heard this yesterday, but now it’s official:

In the days since Senator Mary Margaret Whipple announced her intention to retire from the General Assembly, I have been weighing the possibility of running for the seat she has held with such distinction since 1996. I am gratified that many people have encouraged me to seek the Senate nomination, and it would be a tremendous honor to succeed Mary Margaret in the Senate. However, I have decided that I can best serve Arlingtonians by remaining in the House of Delegates.

This has been a tough year for Arlington in Richmond. Despite the unified efforts of Arlington’s General Assembly delegation, important measures that were aimed at bolstering the County’s economy, protecting its interests, and upholding its values, met a hostile reception. Next year the entire Arlington delegation, including the new Senator from the 31st District, must be prepared to work at restoring the trust and respect for the County that it deserves and that so many have sought to achieve. 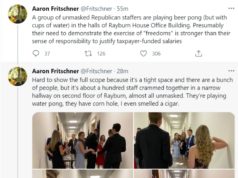