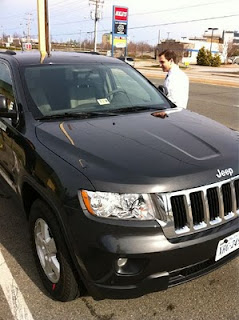 Don Mark, political director of the Democratic Party of Virginia (DPVA), tweeted the picture at right this morning with the note, “About to hit he road with @davemillsVA to Wytheville in our sweet Grand Cherokee.” Dave Mills is DPVA executive director.

Depending on the model, a Jeep Grand Cherokee gets 14-16 miles per gallon city & 20-23 mpg highway. With Virginia gas prices ranging from $3.19 in Troutville to $3.79 in Alexandria, should DPVA employees be blowing members’ money on a gas guzzler? I asked, “Maybe a little tone-deaf to be bragging about driving SUV at time of $3.50+ gas, no?”

Setting a better example was Del. David Englin, who tweeted, “heading to NYC on Bolt Bus for weekend getaway w/family & friends.” A ticket on Bolt is not only cheaper than a single day’s worth of parking in NYC (never mind gas & tolls), you can get work done with their free WiFi instead of grinding your teeth in traffic on I-95. And oh yeah, your energy use & carbon pollution will be rock bottom.

I’m aware the Bolt Bus doesn’t stop in Wytheville. But a Ford Focus would be just as capable of handling that gritty, tough, off-road drive on … um, I-64 right to I-81. And, especially after a session in which 23 House Democrats voted to let Big Coal ignore water quality standards & Democratic leader Ward Armstrong voted to block energy efficiency standards, it wouldn’t send the message that energy, environment & fiscal responsibility take a back seat at DPVA.

Where the upcoming Virginia Special Session will be held... https://bluevirginia.us/2020/08/virginia-house-democrats-announce-special-session-agenda-budget-revisions-covid-19-relief-criminal-justice-and-police-reform-making-virginia-more-equitable#comment-5029037235