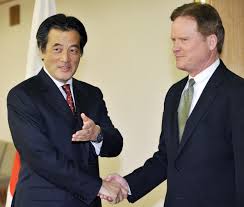 Sen. Webb — Chairman of the Senate Foreign Relations Subcommittee on East Asian and Pacific Affairs — has issued a statement on the situation in Japan:

I am inspired by how the Japanese people are working together to assist one another in the wake of this horrific natural disaster.

The decisive and immediate response by the Japanese government and Self-Defense Forces has saved countless lives, as did Japan’s preventative commitment to construct buildings according to the highest earthquake standards.

Just weeks ago I spoke in Tokyo about the importance of the United States-Japan alliance. As we have seen in recent days, our countries are more than allies in many respects.  American military and civilian personnel are working side by side with their Japanese counterparts in the international aid mission appropriately called “Operation Tomodachi” or “Operation Friends.”

I extend my deepest sympathies to those who have lost loved ones in this disaster.

Here at Blue Virginia, we strongly agree with Sen. Webb in extending our deepest sympathies to the victims of the earthquake and tsunami, and in greatly admiring the courage and dedication of the Japanese people as they “[work] together to assist one another in the wake of this horrific natural disaster.” I’d add tremendous praise and admiration for the workers who have been risking their lives in a heroic effort to prevent meltdowns at several nuclear reactors. That’s truly awe-inspiring.

Video: Trump’s Former Chief of Staff, Who Helped Trump Try to Subvert the 2020 Election and Stay in Power, Now “Working With” VA House...