I voted against both continuing resolution proposals that were before the Senate today.  It was clear at the outset that neither proposal would pass.  This piecemeal approach is destructive to the legislative process and does not further the ultimate goal of a continuing resolution that funds the government at a responsible level for the remainder of the fiscal year.  I look forward to working with my Democratic colleagues in the coming days to craft a responsible funding bill that will keep our government functioning and actually address the systemic fiscal challenges facing our country. 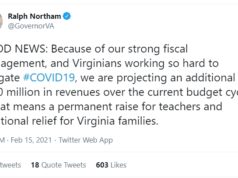 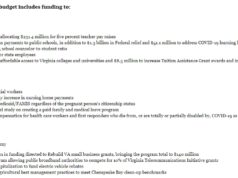 Get this - Rep. Bob Good (R-VA05) actually PRAISES Marjorie Taylor Greene for her rabid homophobia. Of course, birds of a feather and all... ugh. https://bluevirginia.us/2021/02/wednesday-news-kerry-likens-global-inaction-to-a-suicide-pact-us-capitol-rioters-came-prepared-for-war-senate-hears-in-testimony-joe-biden-wants-to-re#comment-5281321008

Just based on this alone, @JasonMiyaresVA should never EVER be Attorney General of Virginia. "Appalling" is definitely the right word for him not believing in the presumption of innocence, which is a cornerstone of our legal system. https://bluevirginia.us/2021/02/wednesday-news-kerry-likens-global-inaction-to-a-suicide-pact-us-capitol-rioters-came-prepared-for-war-senate-hears-in-testimony-joe-biden-wants-to-re#comment-5281305324 h/t @vaplan2018