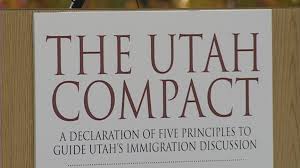 I was just listening to this NPR story on Utah’s new immigration law being a potential “model for America.” As the NPR story explains, “If you were to choose a state that would allow illegal immigrants to work and drive without fear of deportation, you probably wouldn’t pick Utah” – a state in which the governor, House and Senate are all controlled by Republicans, and which voted 62%-35% for John McCain and Sarah Palin in 2008. Yet here we have Utah Governor Gary R. Herbert signing “a guest-worker bill, which is opposed by some conservatives as amnesty.” But wait, the story gets even better:

“The Utah legislation is a very rough draft of what we call comprehensive immigration reform at the national level,” Sharry says.

“It combines enforcement and a program to make those here legal,” he says.

Sharry says that in Utah, “what you have is, in a ruby-red state, some legislators and the governor; and the Mormon Church; and a conservative think tank; leading the way towards a more enlightened approach towards immigration.“

A “more enlightened approach towards immigration” – hey, what a concept! My sarcasm comes in part because of the constant demagoguery on this issue from anti-immigrant forces across the country. For instance, here in Virginia, this past General Assembly session saw a raft of bills that Del. Patrick Hope correctly called “a ridiculous blame game and just plain wrong.” Hope added that the only thing these bills have in common is that “they are message bills,” the message being, “If you are an illegal immigrant, we don’t want you in Virginia.” The bills – the vast majority of which were killed, thankfully, by the Democratic-controlled State Senate – were also, as Hope put it, “bumper-sticker politics and throwing redmeat to the Tea Party.”

In other words, the Virginia immigration bills – not to mention unhinged rhetoric by right wingnuts like Jackson Miller – were completely unhelpful, actually counterproductive, in just about every way. In stark contrast, redder-than-red Utah is at least trying (although let me emphasize, I am NOT a fan of “guest worker” programs!) to deal with this issue like sane, mature, intelligent grownups. Unfortunately, here in Virginia, we don’t have leaders like Governor Gary R. Herbert, we’ve got unhelpful ideologues like Bob McDonnell and Crazy Cooch. What did we do to deserve this?