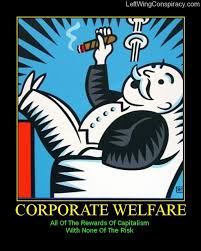 Over at the Scaling Green blog (and elsewhere), cleantech guru Mike Casey and I have been writing extensively about taxpayer-funded corporate welfare to the dirty energy industry. For instance, in this article Mike Casey points to dirty energy’s “$72 billion tab at the taxpayer’s bar from 2002 to 2008 alone.” And, Casey concludes, “The new, (supposedly) fiscally conservative Congress could do what it has committed itself to doing – cutting wasteful spending – by starting with arguably the most wasteful spending of all: corporate welfare checks for the highly profitable, highly polluting oil and coal industries.”

Not surprisingly – but sadly – Congress hasn’t done so. Just recently, for instance, the House voted along party lines “to protect corporate welfare for Big Oil, even as they call for draconian cuts to programs that everyday Americans depend on each day.” And that’s just the tip of the iceberg, given the fact that we don’t even know the extent of dirty energy subsidies, which the International Energy Agency’s chief economist has called “the appendicitis of the global energy system which needs to be removed for a healthy, sustainable development future.”

Yet despite the obvious need to deep-six subsidies for polluting, addictive, national-security-harming, icecap-melting fossil fuels, the subsidy beat goes on. And it’s not just in Washington, DC, it’s also right here in Virginia (and in other states). Thus, today’s Washington Post headline, “In shaky economic times, Virginia doling out tax breaks”.

That’s right, despite a “shaky economy” which has “slashed at least $6 billion from Virginia’s treasury” and forced painful cuts to education, transportation, and many other important programs, just this year we had the Virginia General Assembly renewing “a $45 million-a-year provision for Virginia’s two most powerful electric utilities and the coal mines that supply them.” Actually, combined with “an existing and related tax break for companies that extract the most hard-to-get coal and natural gas, the credits amount to at least $93.3 million a year for utilities and coal-mining concerns – or about $17,000 for each existing mining job.”

According to Del. Albert Pollard, this “Coal Employment and Production Incentive Tax Credit” is utterly foolish: “Virginia’s tax credits reflect the spending habits of Washington, D.C., and the economic planning of the old Soviet Union…It’s not even helping the miners – it’s helping the  companies.” That’s right, Virginia is throwing nearly $100 million a year at companies like Dominion Virginia Power, Alpha Natural Resources, Appalachian Power – not to mention the $120 million a year we give to something like 871 super-rich people in Virginia every year, thanks to Tim Kaine’s single worst move as governor, his repeal of Virginia’s estate tax (note: Mark Warner had wisely vetoed that repeal).