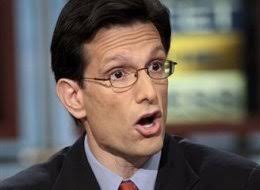 “All of us need to be tempered by the fact that we’ve got to stop spending money we don’t have,” Majority Leader Eric Cantor (R-Va.) told reporters at his weekly press briefing. “Essentially, what you are saying is to go borrow money from the Japanese so we can spend it there to help the Japanese.”

President Barack Obama said Monday that the United States “will continue offer any assistance we can” to Japan as it deals with aftermath of the earthquake and tsunami. But the majority leader did not back down from the House GOP’s proposed budget cuts for programs that respond to natural disasters both at home and abroad. H.R. 1, which the House passed in February, would cut the U.S. Agency for International Development budget by about $121 million, or roughly 8.7 percent.

Now, can someone please explain to me what’s wrong with Eric Cantor exactly? No brain? No heart? Neither? It’s so embarrassing that this clown is from Virginia, what did our great state to deserve him?!?