Yeah, those damn dirty socialists Democrats are really killing the economy, huh? Hahahahaha. By the way, what was the last piece of legislation BONEr and Can’tor proposed to create jobs? Uh, uh, uh…cue sound of crickets chirping. But they ARE hard at work trying to kill jobs in t he public sector, attempting to create as much uncertainty as possible in terms of the budget situation or whether the government will stay open, etc. That’s what Democrats have to deal with, and it’s a testament to our party that we are able to overcome all the obstacles Republicans put in our way – and in the way of our country.

P.S. Another great graph of how the stock market cranks under Democratic presidents, falls under Republican ones, is on the “flip.”

UPDATE: Rep. Jim Moran explains how Republicans are killing public sector employment in a floor speech in the House of Representatives. The video’s on the “flip.” 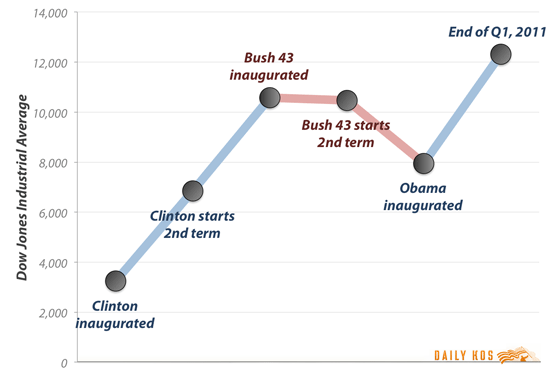