(First in a Series) 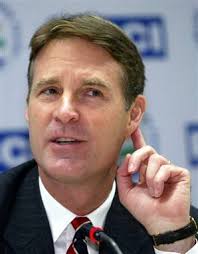 Evan Bayh never listens and is possibly the most tone-deaf Democrat ever to have run for public office.  He  sought to run health care reform in a manner only his wife (a wealthy exec at one of the biggest health insurance companies in America) and Paul Ryan Republicans could love. I cried foul about that on this website.  I’d say good riddance, but he is still doing incalculable damage.

When I first heard what he is doing now, I held my tongue (for a few days, a least).  But I conclude that I would be remiss if I said nothing. Here’s what he’s been doing since he left the US Senate courtesy of wikipedia:


On February 15, 2010, Bayh announced he would not seek reelection to the Senate in 2010. After leaving the Senate, he became a partner with the law firm McGuireWoods in the firm’s Washington, D.C., office. He also serves as a senior advisor with Apollo Global Management, and is a Fox News Contributor.

Can you spell lobbyist? Bayh gives new meaning to revolving door and failure of being a good steward to this nation and his own constituents. It gets worse, though it is hard to be worse than working for FAUX News.

Now he heads to the US Chamber of Commerce,  to serve, along with Andy Card (WTF?!?) as it’s “bipartisan” deregulation tag team. Yes, that chamber.  It is not your local Chamber of Commerce, the one promoting local businesses, but rather the national arm of big oil and other multinationals, the one and the same organization which put forth those vile ads against health care reform and any effort to remmediate global warming. It’s also the Chamber of Horrors trying to kill Social Security, Medicare and Medicaid, along with every other program of importance.  Where Bayh is concerned, God forbid that our country should value its people.


The Chamber plans to officially announce Bayh’s involvement later this month as it launches the “road show,” which is in part aimed at getting Democrats to side with the Chamber in opposing what it sees as excessive regulation by the Obama administration

Excessive regulation?  Are you kidding me?  Let’s hope Dems aren’t fooled by this turncoat.

But Dems should know better than to follow this jerk off the cliff.  As I suggested earlier in this diary, we’ve seen his  betrayals before.  How could anyone be so self-absorbed and self-serving as the former US Senator from Indiana?  His new motto should be:

So he joins the primary “agency” of climate science denial.  It is hard to beat Bayh for how not to be a Democrat. Take notice, Democrats, and stop focusing on trying to oust a real Democrat who stands up for us (and who broke no laws) from Congress.  And start by passing regulations  preventing the Bayh revolving door.  In this case, for sure, there ought to be a law.