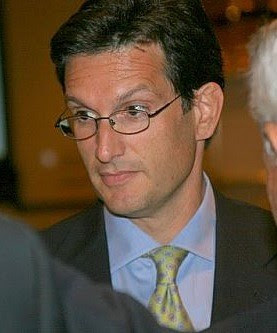 Majority Leader of the U.S. House, Eric Cantor (R-VA), recently stated that before a deal between the White House and Republicans in congress can be reached, “reforms to the system” must be included to avoid a perception by the American public that Washington cannot manage America’s money (too late?).

He went on to conclude that “there was a fundamental disagreement over whether we should raise taxes right now. I believe it’s counterintuitive.”

What is counterintuitive is Cantor’s ability to garner enough constituent support to remain in public office.

Rep. Cantor is indicative of the counterproductive political atmosphere that has taken hold of politics in Washington and spread, in some ways, to politics in Virginia.

Unwilling or unable to point the finger at oneself, politicians like Cantor prefer to sweep party and policy tensions under the rug and blame “the other side” for allegedly spoiling a relatively admirable across-the-aisle attempt at doing what’s right for the country.

To be sure, this kind of finger-pointing is not reserved to one party or one political candidate alone. The Democratic Party has many “Cantors” of its own.

But at the end of the day, what really matters is putting the U.S. back on a healthy footing again.

If your goal is to stay in office, why not attempt to find suitable answers to some of our most pressing problems?

It shouldn’t seem like a radical question, but for some reason it is in the current political environment. “Cantorism” has spread while America waits to see if there’s a short-term cure.